victorToledo3share
@victorToledo3share
hi guys, quick question, is there a way to deactivate a page from an On Deploy Script? thanks in advance
@asharron you dont need to create a home page component, i mean you can use foundation page, just the sitemap can be executed on all the pages

yuvraj1610
@yuvraj1610
Just wanted to know how can we install acs commons as a subpackage in aem 6.5 usingf archetype 19. I tried putting the dependency and subpackage definition in ui.apps module's pom.xml , however its not working

Nicki Tatalovich
@NickiTatalovich_twitter
If there's a prior version of acs-aem-commons installed (3.14.6) on a system that's been upgraded to AEM 6.5, can we just install the new 4.0.0 version or does the old version have to be uninstalled?

swaroop srinivasan
@ssriniv2
There is a constraint violation error when try to install the acs-commons version 3.17.2 (acs-commons-content-3.17.2 package)
how to resolve this issue?

ravinderkp
@ravinderkp
While running the Update asset workflow using Bulk Workflow manager V2 in AEM 6.4 it is throwing exceptions that not able to lock/unlock asset. Any suggestions please

amargheriti89
@amargheriti89
Hi team… do you know if exists some functionalities in acs to make full text search based also on the content of files? (e.g. pdf or ppt)?

Jens Lauterbach
@jenslauterbach
Hi everyone. I was wondering when the next release will be published. There is a bugfix in the current development master that I am waiting for. I have decide whether I create my own build of master or wait. There is a milestone 4.2.2 but is has no release date yet and only 4 of 10 tickets are done for that milestone. I don't want to push, just would like to know so that I can plan our sprint :)

Niek Raaijmakers
@niekraaijmakers
Good question. I will ask the guys who do this in our internal chat to make sure they read this

Jens Lauterbach
@jenslauterbach
@niekraaijmakers Thank you :) As I said, I appreciate all the work and don’t want to be pushy. I can help myself if you guys don’t want to release in the near future.

Niek Raaijmakers
@niekraaijmakers
we will attempt to do it today or tomorrow. cannot promise for sure as we are drowning in work as well, but we try, as keeping the community happy is important

Jens Lauterbach
@jenslauterbach
@niekraaijmakers Great :) Thank you so much :thumbsup:

Niek Raaijmakers
@niekraaijmakers
I'll send you an invoice to your corporate CC ;)

Jens Lauterbach
@jenslauterbach
@niekraaijmakers How many people were involved in the release (the process, not the tickets)?

ravinderkp
@ravinderkp
@cylinder-y Thanks for the reply! I tried with Syntentic wf option but @davidjgonzalez not recommending the WFs using external processes or S7 process to use this option.

david g.
@davidjgonzalez
@ravinderkp / @cylinder-y --- unfortunatley Synthetic WF doesnt support External WF Process since those are, by nature, async - and unfortunately the S7 process step is an external WF process (since it sends the data to s7 for processing)... even more unfortunately, somewhere in the newer versions of AEM (6.5 atleast, maybe some 6.4 SPs) Bulk Workflow Manager's ability to track execution of the AEM Workflow Engine (non-synthetic) stopped working - and i dont know why :(

ravinderkp
@ravinderkp
@davidjgonzalez I need your suggestion, If Update Dam Asset WF is not having "S7 step" and any other External Process, I hope we are still good to use Runner as Syntentic wf multi threaded?

Es
@sbhtosia_twitter
Hi all, can anyone confirm this https://adobe-consulting-services.github.io/acs-aem-commons/features/system-notifications/index.html feature is working on 6.4.4? I cant get the notification displayed on any page except where it was configured. Don't see any exceptions also, I'm on ACS v3.9.0

_
Niek Raaijmakers
@niekraaijmakers
well you would be better off with 4.x I think :) but you can likely use 3.17

MatWrz
@MatWrz
Is adding ACS commons via maven still supported for AEM 6.5? The page still exists but the homepage no longer references it

Is adding ACS commons via maven still supported for AEM 6.5? The page still exists but the homepage no longer references it

I came here to find out the answer to this very question, anyone have any details?

swaroop srinivasan
@ssriniv2
I have a customer on AEM 6.4.3 and they are using ACS commons Report Builder bundle. They say they are using a user assigned to the administrator group, but they are not able to see the 'Edit' button when viewing list of reports
As shown in image below 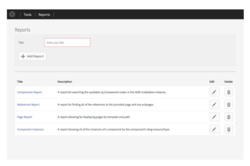 Is this a known issue, or is there a way where we can set the permission on this

bhaveshkaloni
@bhaveshkaloni
We are upgrading AEM from 6.3 to 6.5..multifields are not saving the values in repository.
we are using granite fields in multifields with latest acs-aem-commons package

Brendan Robert
@badvision
Multifield is an AEM feature, not an ACS Commons one, at least in the sense that we've deprecated the multifield widget in ACS Commons in favor of the product version.
e.g. have you tried the GraniteUI multifield instead?

Brendan Robert
@badvision
@MatWrz , @boswellt -- AFAIK you can still include ACS Commons in your packages. Nothing in the package manager has changed in AEM for a very long time. However, there are some pros and cons to consider when deploying ACS Commons as part of your code package. If you're doing a lot of development it can be a tad disruptive to have all the OSGi services in ACS Commons (and anything depending on them) restarting during deployment, etc. Not to mention if you have multiple packages/bundles for your project then you might want to deploy ACS Commons separately as well to decouple things. Packaging the ACS Commons bundle in your project makes small projects easier to install in new environments since you only deploy one package and you're done. However, over time that might not be necessarily useful in the long run. It's really up to you to decide which works best for your project, etc.

I am an AEM support consultant and I am working on an issue raised by WYNDHAM WORLDWIDE OPERATIONS, INC.

Can you please let me know how they can get this issue addressed by the ACS team?

Siddhartha
@siddama_gitlab
Which version of ACS_AEM_COMMONS is best compatible and bug-free for AEM 6.4

Sathish Balan
@sathish-git
Hey guys, I've found an issue with the dtm implementations even in the latest version of acs commons, i know a fix and i know dtm is no longer supported but i believe there are still some customers like us for example still using DTM. Thoughts?

Query:
I'm new to using ACS Commons in a project and was wondering if there's way I can restrict/filter what I want to install from ACS Commons.

Example:
For example, I want to install the OSGi bundle & certain resources under '/var/acs-commons/reports', but not other resources such as : '/apps/cq/core/content/nav/tools/acs-commons'. Is there a way to do this?

Background:
I'm installing ACS Commons via maven as a subpackage. I think the best would be if such filters could be added under the maven POM tag where one can specify what to path(s) to install from the subpackage. Kind of like a way to override the filters specified in the ACS Commons package itself.

Sathish Balan
@sathish-git
Hi @niksvers , I think the best way to do what you want to do is to build the ACS Commons packages by yourself (Have to be careful with this) after modifying the filters. With that said, why would you want to do this? I'd always recommend installing the whole thing even if you don't want to use some of the features.

Hi all,
I migrated the project I'm working on from version 6.2 to version 6.5 of AEM. So I installed the the acs commons v. 4.3.2, previously v. 3.6.2.
Unfortunately, I found a bug in saving and showing the data of the multifield fields of type acs-commons-nested = "JSON_STORE" in page properties.
Do you also find bugs in this regard? In case what you did to solve them?

There are certain things installed with ACs Commons package that effects the UI, for example : '/apps/cq/core/content/nav/tools/acs-commons'. This adds new options for authors/admins who don't need to have access to such options(in the current project at least).

I guess for this specific scenario I could remove read rights for the user groups that shouldn't be able access the mentioned options, but there could be more things like this that gets installed with ACS Commons that I might not be aware of.

Yeah, modifying filters & building ACS Commons separately does seem like a 'hacky' way, probably better to not go that way. :)

sindhugondela
@sindhugondela
Hi All,
we are implementing AEM Assets and doing a huge migration of assets upto 15TB. we used s3 ingestor to add assets from an s3 bucket to AEM which was successful. the next step was to use "bulk workflow manager" in ACS-COMMONS to trigger DAM UPDATE ASSET workflow. for testing, i just started the process for only 5 assets and when i checked my workflow instances, it keeps repeating the same asset infinitely. i deleted more than 300 instances of this same asset. is there a way to completely stop this job. i tried stopping it from bulk workflow manager page. but nothing helped. please let me know if there's a way to stop the bulk workflow manager job.

Sathish Balan
@sathish-git
Hi @sindhugondela I’m guessing this loop is happening probably because of an existing workflow launcher. Can you check and tell whether your launcher for Asset modification is turned on or off?

sindhugondela
@sindhugondela
its turned on
i've read few posts in ACS issues that bulk workflow manager will not work with external process like scene 7 upload in DAM UPDATE ASSET Workflow.
is that true?
what is the workaround for bulk assets in that case?

Sathish Balan
@sathish-git
Well you don't really have a choice with respect to running the workflows on all the assets you have but I think you can try to atleast stop the repeats of workflow instances on the same payload.