These are chat archives for BSData/wh40k

Daniel Mudd
@btjmp
May 30 2017 00:52 UTC
The points listings all being on a handful of tables certainly doesn't make adding points to things easy
Flipping backwards and forwards isn't the most convenient thing ever.

Earl Bishop
@DrTobogganMD
May 30 2017 02:09 UTC
Only 1 Destroyer Missile per round I thought
oh nvm
Just a longer way to say 1 use only

Adam Vollrath
@axisofentropy
May 30 2017 02:10 UTC
stormsurge has 3 attacks and, unlike imperial Knight, can't walk over infantry. surround it with a dozen models, it's stuck.

Earl Bishop
@DrTobogganMD
May 30 2017 02:17 UTC
I'm happy with the leaked c'tans
Kinda sad it's not equippable powers like 5th
but they seem useable now
And they're characters, so ... GL killing the fuckers.
And 8th Reanimation. It's back to "We'll be BAck" in a fashion
Exactly like ghouls/skeletons in AOS.
Gonna piss off a lot of people. I love it

Daniel Mudd
@btjmp
May 30 2017 02:22 UTC
My initial opinion of Tau changes are an overall nerf, maybe a little heavy-handed and ends up removing a lot of our quirky stuff. Most notably buffed unit is Pathfinders, Railsides got a big buff but they cost a ton. Crisis Suits doubling in cost hurts my Farsight soul

Owlsbane
@Owlsbane
May 30 2017 08:27 UTC
Sisters of Battle proper leak: http://natfka.blogspot.nl/2017/05/sisters-of-battle-leaks.html?m=1
Necron (in Italian). Scroll to about halfway down the page. Stats and such are perfectly readable for non-Italian speakers: https://www.dakkadakka.com/dakkaforum/posts/list/12630/724730.page

Simon Porter
@FarseerVeraenthis
May 30 2017 09:10 UTC
what is a "failed morale test" though...?? a test where people run away/are lost? because, that works both ways in that MORE people could run away!!

Simon Porter
@FarseerVeraenthis
May 30 2017 09:11 UTC
Sisters look good, 20 members in a squad, plenty of bodies, plenty of money for GW if they don't make plastic ones available!

Owlsbane
@Owlsbane
May 30 2017 09:14 UTC
I'm expecting plastic sisters and new unit types when their codex hits. For now they're part of the Imperial Agents in the Index (just like in 7th), but on the wh40k site they have their own entry amongst the other factions.

Simon Porter
@FarseerVeraenthis
May 30 2017 09:22 UTC
wait until 8th arrives "properly"... remember the Version 2 BS upgrade, and all the crying... I'm anticipating that level of crying for all armies :-( but I'm sure it'll be fine, everyone knows the data is maintained by a community of volunteers right??

Simon Porter
@FarseerVeraenthis
May 30 2017 09:46 UTC
hehehehehe :-)
because I've been playing since forever I remember the original model

Jon Kissinger
@alphalas
May 30 2017 09:48 UTC
GW always used the profile picture for Marbo so the figure always looked better in GW pics
Of course the internet has to stress the derp of the figure lol

Will Pattison
@GenWilhelm
May 30 2017 10:03 UTC
@Crowbar90, looking good. A couple minor points of improvement:
Melta bombs should be free and mandatory.
Ripper pistol and envenomed blade should appear as entries under Marbo.
Missing rules for sniper and poisoned.

Francesco Venturoli
@Crowbar90
May 30 2017 11:35 UTC
You know, I've never used GitHub release system
I think I'll leave the pleasure to someone else for now

Simon Porter
@FarseerVeraenthis
May 30 2017 11:39 UTC
but, but, but..!! The last release was two weeks ago!! (4 commits since last release)
yeah, wait for a little while, see if anyone else needs any other twiddling

Francesco Venturoli
@Crowbar90
May 30 2017 11:39 UTC
I bet it's going to be the last release for 7th edition anyway, so it's probably worth waiting

Will Pattison
@GenWilhelm
May 30 2017 11:42 UTC
well releases dont cost us anything, why wait 3 weeks to get your hard work out there? :P

Francesco Venturoli
@Crowbar90
May 30 2017 11:44 UTC
I don't know, I always have this feeling that releases must be some kind of milestones for big changes and upgrades... But I also tend to forget that most users need releases because they don't have access to our development versions :P

Jon Kissinger
@alphalas
May 30 2017 11:45 UTC
Well we want to make sure we don't release that tau stuff @bitjump was working on

Simon Porter
@FarseerVeraenthis
May 30 2017 11:45 UTC
yeah, releases here basically send the data to Appspot / allow it to be picked up by Appspot

Jon Kissinger
@alphalas
May 30 2017 11:46 UTC
Is it? Idk I haven't actually looked at branches since Wednesday lol
Been too damn busy

Dirk Bachert
@Thairne
May 30 2017 14:28 UTC
Oy @alphalas I've informed my DA FB group of future plans. Some guys went and told me that 30k has no stats or rules anymore for months now

Will Pattison
@GenWilhelm
May 30 2017 14:34 UTC
if he's on mobile make sure he's not using "low memory mode" - it prevents rules and profiles from displaying

Dirk Bachert
@Thairne
May 30 2017 14:39 UTC
I'm definately NOT the guy you want to interact with customers.
"Did you try to appease the machine spirit?"
"Excuse me?"
"Did you apply the sacred balm to your machine?!"
"What are you even talk-"
"HERESY! PURGE!"

Dirk Bachert
@Thairne
May 30 2017 14:47 UTC
Hanging? What a novel idea... An Execution-pattern Noose Servitor has been dispatched to your cubicle. Please stand by for recycling.

Dirk Bachert
@Thairne
May 30 2017 14:51 UTC
noose are a well known STC discovered by Magos Arkham Noose in M30 in an old boxroom in the forge of Mt. Olympus. So nooses are not novel at all

Will Pattison
@GenWilhelm
May 30 2017 14:58 UTC
what, is the livestream schedule not good enough?

Adam Vollrath
@axisofentropy
May 30 2017 15:08 UTC
i'm happy we got a rhino dataslate in the sisters release

Will Pattison
@GenWilhelm
May 30 2017 16:01 UTC
with these leaks coming out thick and fast I think we should allocate catalogues sooner rather than later

Simon Porter
@FarseerVeraenthis
May 30 2017 16:12 UTC
I don't think it's got an invulnerable save though, so you can chew through them faster...

Simon Porter
@FarseerVeraenthis
May 30 2017 16:31 UTC
The frustrating thing about that army building info is that it doesn't tell you the equivalent power level of the army... :-1:

Will Pattison
@GenWilhelm
May 30 2017 16:33 UTC
i guess power levels arent used in match play then

Owlsbane
@Owlsbane
May 30 2017 17:21 UTC
Q&A on GW facebook: Q: Do weapons the unit starts with in its description have to be purchased separately for matched play, or are the points included in the cost of the model?
A: All models come with a standard weapon, and those are covered in the points cost of the base model.

Adam Vollrath
@axisofentropy
May 30 2017 17:23 UTC
yeah that facebook reply is incorrect
some units have zero cost weapons but not all.

Owlsbane
@Owlsbane
May 30 2017 17:25 UTC
I know, it seems off to me as well. Those Primaris Marines have only one load-out, so why have a pointslist for weapons then?

Daniel Mudd
@btjmp
May 30 2017 17:25 UTC
I think it's safe to almost definitely disregard that answer. Otherwise, 90% of the weapon points costs they've printed have no purpose

Dirk Bachert
@Thairne
May 30 2017 17:31 UTC
Jeez. Everytime I post in the DA FB group about something BS related I get.. kind of.. an anti-shitstorm. So many thanks and good jobs and whatnot... It's almost getting annoying! Guys, I just want to tell you something xD

Amadeusz Sadowski
@amis92
May 30 2017 17:32 UTC
I think there actually are people who know that it's all volunteers and really want us to keep doing what we do :)
It is in their best interest that we keep on :D

Dirk Bachert
@Thairne
May 30 2017 17:44 UTC
Jup, those guys are out there.. it is good to know that our work IS valued. Especially with those entitled brats that report issues sometimes..

Adam Vollrath
@axisofentropy
May 30 2017 17:44 UTC
if anyone complains just ask if they'd like to renegotiate their support contract

Owlsbane
@Owlsbane
May 30 2017 17:49 UTC
Base cost of models officially clarified on Twitter:

Daniel Mudd
@btjmp
May 30 2017 18:07 UTC
I have some selection entries with assigned categories. They're not appearing as available entries at all as soon as I drag that catalogue file into roster editor. Any idea why?

Adam Vollrath
@axisofentropy
May 30 2017 19:05 UTC
Bloodthirsters and some other Khorne stuffs http://www.bolterandchainsword.com/topic/333990-leaked-chaos-space-marine-rules/page-12#entry4761933

Will Pattison
@GenWilhelm
May 30 2017 19:12 UTC
khorne units get to fight twice per turn
i am okay with this

Simon Porter
@FarseerVeraenthis
May 30 2017 19:24 UTC
does anyone else feel like they've tried to buff melee too far?
and also, I thought they were trying to remove bloat - almost every weapon does something different!!

Adam Vollrath
@axisofentropy
May 30 2017 19:32 UTC
nothing feels unbalanced to me yet. remember units can Fall Back from melee.

Simon Porter
@FarseerVeraenthis
May 30 2017 19:33 UTC
but they do that at the end the Fight phase, so in the case of Khorne units, is that before or after the second attack??

Simon Porter
@FarseerVeraenthis
May 30 2017 19:34 UTC
the lesson is, don't let Khorne units get into combat with you

I don't know that they buffed Melee too far. I play Orks. The ability for a unit of Ork Boyz with a powerclaw nob to kill a Rhino in close combat has been reduced, and to Kill a dread or imperial Knight it has been reduced much more dramatically. Same for other monsters like Riptides or Wraith Knights. I should have an easier time getting there, but once I'm there I'll have a rougher time killing it.

Same goes for my Genestealers. Much easier time to get to close combat. Much harder time killing big stuff once they get there.

Simon Porter
@FarseerVeraenthis
May 30 2017 21:02 UTC
but they can chew through infantry like a hot knife through butter...

Troy Graber
@tag8833
May 30 2017 21:07 UTC
Yeah, somewhat. They are probably going to effectively lose an attack (based on the leaks so far), but they will be hitting on 3+ most of the time now, and with Strength 4 all the time, they will have a better time after the 1st round of combat.
<- Talking about orks. Genestealers gained an Attack, got cheaper, faster, and more durable.
And orks get their attack back if they make close combat with 20+ models, but count me skeptical of that.

cartag
@cartag
May 30 2017 22:40 UTC
He's not a daemon, he's just been resurrected by Khorne himself after getting ran over by a land raider

Owlsbane
@Owlsbane
May 30 2017 22:42 UTC
Oh wait, that guy! Sorry, not really a Chaos fan. Got it mixed up with that named Bloodthirster.

cartag
@cartag
May 30 2017 22:43 UTC
No different than plopping him in the middle of a squad of zerkers :)
just have them flanking him

Owlsbane
@Owlsbane
May 30 2017 22:55 UTC
Tyranid Profiles: http://imgur.com/a/IY9ks
Do we already have pointscost for Chaos weapons (Heretic Astartes, I think)?
Ah, what the hell: 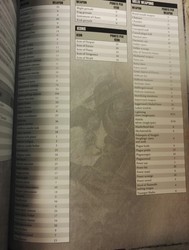 cartag
@cartag
May 30 2017 22:59 UTC
Combi points are the same
heavy flamer and bolter, havoc launcher... flamer, lascannon, etc
all same points as loyalist or other leaks 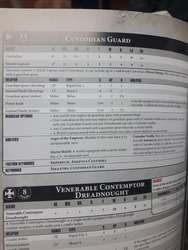 cartag
@cartag
May 30 2017 23:03 UTC
to those working on prep work, I just synced a new GST
There will likely be another one up after I add in more weapons as entries.

Troy Graber
@tag8833
May 30 2017 23:19 UTC
Wow, the T-Fex really took a whallop from the nerf bat. That was unexpected. He is more durable, I guess, but his damage output is going to be fairly small.
He also lost quite a few upgrade options. A much less versatile unit now.