These are chat archives for FreeCodeCamp/DataScience

For those into R, found this in my Twitter thread:
https://pbs.twimg.com/media/DVXd--1XUAUMFD9.jpg
There is also this visualization course, advanced, with JS:
https://beta.observablehq.com/@nstrayer/t-sne-explained-in-plain-javascript

Alice Jiang
@becausealice2
Feb 06 2018 20:59 UTC
I love observable. So many awesome posts! Better than bl.ocks for DE, too, because it's notebook style. Now it's code with explanations :D
For D3

This is a first look at the ThiagoFerreir4's ego network in the main chat before leaving completely. 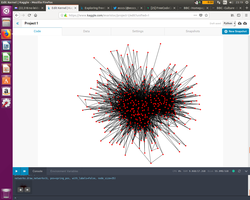 I am trying to build the networks from the user's point of view. The focus is that networking is a time-space phenomenon that could be relative to the user.

Thiago is relating to other users in the network without knowing completely how they related to each other.

If he gets absent for long periods of times, he might come back and expect, at least at the beginning, that the relations stayed the same by the time he left.

So I am only considering those relations between other users on his network only during the time he is active, because it is what he sees.

Alice Jiang
@becausealice2
Feb 06 2018 22:22 UTC
Yeah, Mike Bostock has been promoting it on his Twitter for a little while, now. I've added it to my "try out ASAP" list.