Sam Aiken
@SamAI-Software
@evaristoc yeah, of course, will do that asap

@krisgesling ok, lets get started :)
I've been working as UX designer for a few years and what I've learned during that time is that we should always tell users a story from A to Z, step by step, fulfilling their basic need/expectations first and only then taking care of special features.
Your gender visualization is great! But it doesn't look like a beginning of a journey, does it?

Just imagine that you land a website of FCC Survey 2016 for the first time and you never saw it before. What do you want to know first? Probably it's something like:

And your previous version was very good for that! Of course you will want to know about gender, too, but it's probably the next step.

So anyway we will need to have a country breakdown at least by CountryLive and Age. Somebody can do it from your forks, or you can do it yourself and that would be a great contribution to the project and also you will be featured even more (I'm pretty sure, that @evaristoc will take care of that :+1: )

If you decide to create it yourself, then I have one cool idea for you! Check out stackoverflow's survey the first Geography section has a map, but there are also 3 buttons, which can switch 3 different maps! That's a great feature, but a weak implementation, because all their 3 maps looks almost the same.
I suggest us to take this feature, but make a better implementation!
You can extent your visualization, so it will show us:

Until you make a decision, I have reserved Demographics section for you FreeCodeCamp/2016-new-coder-survey#41

Sam Aiken
@SamAI-Software
@evaristoc, we all wish you luck with that! :D

Are you already working as a software developer? 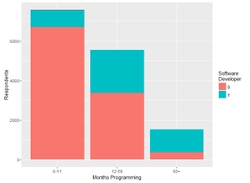 DSR (DataScience Room) is an effort to gather campers of all levels and specializations willing to engage in discussion, collaboration and practice of data-related projects, with preference for using FCC data.
Previous Digest
Tentative DSR site: http://evaristoc.github.io/FreeCodeCamp_DSR/

This week we continued working on the Survey 2016. @krisgesling made a first final draft of the map for Gender/Ethnicity. Other people in the room showed interest in working some visualizations. @SamAI-Software has been helping to organise the visualizations and hightlighted a few trends from the data. @erictleung is still working a final clean dataset (remember that the current dataset can be used though). @SamAI-Software and me are helping @erictleung with his work.

Announcement of the week:

Few HOT KEYWORDS to find what it is going on recently in this channel:

gender,questions,respondents,podcasts,survey (OBS: tried a new algorithm... maybe not the best one :))

(For a word cloud check:
http://evaristoc.github.io/FreeCodeCamp_DSR/update )

Would you prefer to work for a startup, start your own business, work for a multinational corporation, work for a medium-sized company or freelance? 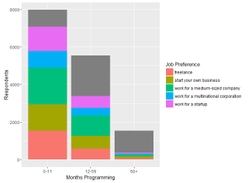 evaristoc
@evaristoc
@SamAI-Software can you please add legend for the grey area? If NA, I think it would be better to get rid of it, specially for the last one... BUT then keep it around, in case someone more statistically-minded want to approach your results...
Ah! I love gplot...

Are you planning to work on those viz in d3.js? If you think you need help, can you find someone here who can join you to make those gplots into D3? I think there is even a d3-based library that use similar styling...

Does anyone in the room can suggest something?

Sam Aiken
@SamAI-Software
@evaristoc yeah, grey is exactly for NA, sorry for no legend. But if I get rid of NA, then we cannot see how many people don't have any preferences (because survey didn't have answer "no preference"), so I keep it for this purpose 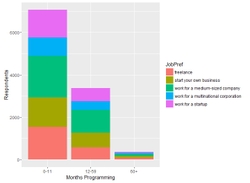 Are you planning to work on those viz in d3.js?

Yes, for sure! But first I want to explore all data and find some interesting things

Nice work and nice that you are going to work on this with d3!!

I would suggest a similar effect as that one made by @krisgesling:

They are only suggestions, @SamAI-Software... No need to implement them.... it would be nice to see it though...

About your previous chart (about working as a software developer): could you just substitute the legend 0-1 by "No/Yes"? Those results are interesting too...

Jacob Bogers
@jacobbogers
anyone want to study multilinear algebra with me?

@evaristoc, yeah, I'm also very curious about it - will dig into that asap

Yeah, I see your point! Don't worry, right now all my visualizations are for acknowledge purpose only. I'm exploring the data and sharing some interesting facts with text & simple vizs.
But I need to add a legend for grey NA, that's totally true, but not sure how to do it in an easy way with ggplot. You said you love gplot, can you help me? :) Do you know how to add custom legend for stat_count or just add NA into legend?
Of course, I've tried to search for it, but didn't find any simple solution... R is so not user friendly!
Thanks!

Sam Aiken
@SamAI-Software
@evaristoc lol, I've just discovered that 5 questions were asked only if respondent doesn't work as a software developer, yet. I will write to @erictleung to add that info to questionnaire. 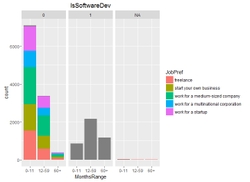 NA is grey
So yeah, my yesterday's statement about "Coders with big experience have less job preferences"was wrong :(

Sam Aiken
@SamAI-Software
@evaristoc, but still, tell me please how to do custom legend or just add NA into the legend, if you know.

Quincy Larson
@QuincyLarson
@SamAI-Software great work with these charts! Yes - explore the data first, then convert to D3. I think these stacked bar charts are a good way to go for a lot of visualization, though they aren't as exciting as, say, a force-directed graph ;)
@evaristoc as always, thanks for the great weekly digest!

@jacobborges
I am interested, although I might not be on pace for any other training at the moment... can you tell me why you are into multilinear algebra and where, how, etc is the training you want to follow?

evaristoc
@evaristoc
:+1: let me know if it works for you, anyway...

Sam Aiken
@SamAI-Software
For now I just don't show NA's, but later on I might come back to that issue

About how many hours do you spend learning each week? 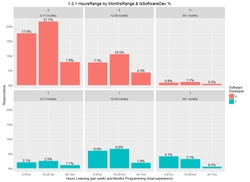 Please feel free to correct my English (or data)!