@sudhirkhanger there is nothing built-in for Orchid, currently, but the OrchidPosts plugin handles content very similarly to Jekyll or other SSGs, so the migration tools for other SSGs should get you mostly what you need to import it into Orchid as well. Might need to do some manual work to make sure the Front Matter fields are correct after using those tools, but they should be helpful for the bulk of the work.

And Hugo has a few options as well, if the Jekyll one doesn't work: https://gohugo.io/tools/migrations/#wordpress

Sudhir Khanger
@sudhirkhanger
@cjbrooks12 so if I import using Hugo's tool https://github.com/palaniraja/blog2md then I would simply need to drop the markdown files into the posts folder and then it should be running?

Casey Brooks
@cjbrooks12
For the most part, yes, though I've never used that tool for myself so I can't make any guarantees. You may need to change the filenames afterward to match Orchid's required format, but the contents of those files should pretty work pretty well right out of the box with that tool.

Man
@man-at-home
I am using orchid for a small programming project site. Now I have linked asciidoc output (one asciidoc file contains link:siblingdoc[] to other file). Those links will break as pages (since the root document gets into another subfolder).
Would there be a way to keep the asciidoc relative links working while including the content into a orchid site?

Casey Brooks
@cjbrooks12
I don't think so, unfortunately. I haven't checked in a while, but I don't think the Asciidoctor library opens up any APIs for custom-loading linked pages, or anything like that. You'll need to convert those links to Orchid's internal links

Man
@man-at-home
@cjbrooks12 in this case it is not an option unfortunately. I need those files still be processable ith asciidoctor. I could process them first and link them as html ... losing all styling of orchid. Jikes. No workaround (putting them into wiki, disabling folder support or such things?)

Casey Brooks
@cjbrooks12
I might be able to do kind of hack (find/replace those links with a regex, maybe?). I'll definitely give it another shot. Could you create an issue on the repo to track it, and maybe include a link to the Asciidoctor docs for links so I can match the correct format?

Man
@man-at-home
sure thing.. I could live with a very reduced link support (relative file links, no attributes, even same directory only)

Man
@man-at-home
Hi, i played around a bit with asciidoctor documents i want to include in the orchid site. I believe relative links could be made to work with :outfilesuffix:, perhapes additional :relfileprefix: attributes. Is it possible to add attribute setting to orchid asciidoc plugin? (that would be asciidoctor -a or --attribute command line attribute)?
:outfilesuffix: would get rid of .html suffix of its links.

@/all The long-awaited release of 0.18.0 is finally here! There are lots of changes, most of them backward-compatible, but make sure to read the release notes and migration guide to know the full extent of changes and new features.

And as always, if you have any questions or problems with the new version, don't hesitate to reach out here!

ssiddh
@ssiddh
@cjbrooks12 thanks a lot for all the work, I started playing around with the new version. Have been having some difficulties in getting the kotlin documentation to work. I used to specify certain files which I wanted to document in the sourceDir section, but now they seem to have stopped working. Seems like documentation process is not even getting triggered (looked at the generated files)

Casey Brooks
@cjbrooks12
@ssiddh First try checking your config against the tutorial project config. It's been updated to the new system, so double-check the config properties aren't misspelled or anything. Also try setting kotlindoc.fromCache to false to make sure it's not trying to read from a stale cache, and also try setting kotlindoc.showRunnerLogs to true to see the full Dokka output; maybe there's an error happening internally that is being hidden
Also, the new pages' URL is now prefixed with kotlindoc/. So a page previously at localhost:8080/com/example/Application would now be at localhost:8080/kotlindoc/com/example/Application by default (though the permalink is customizable)

ssiddh
@ssiddh
I verified the tutorial project config and it is pretty similar to that. Seeing these warnings
And

This is the config file I have been using:

This is including the changes mention in the migration guide. The sourceDir section hasn't been touched. I need to document only specific files for the project.

Casey Brooks
@cjbrooks12
Ah, that's my bad. I'll update the docs to make it clear that the artifacts haven't changed. The functionality is now implemented in OrchidSourceDoc to keep everything the same, but OrchidKotlindoc etc. is still needed. It's now just a lightweight wrapper to add specific language support to the new system

I am trying to create a blog using Orchid. I ran the script but it's stuck with the above message.

Casey Brooks
@cjbrooks12
It seems to be an issue with Kscript. That dependency resolves fine from Gradle, but I can't get it to load from kscript. I'll have to do some more digging, but I think it's having trouble getting the dependencies it needs from Jitpack. I think OrchidBible is the only one still needing anything from Jitpack, so you can try just specifying the plugins you want instead of using OrchidAll

Sudhir Khanger
@sudhirkhanger
Is cloning and running ./gradlew orchidServe same as running the kscript?
I would have fetched individual packages but I am completely new to Orchid or Kotlin outside Android.

Sudhir Khanger
@sudhirkhanger
I was able to build using the OrchidStarter project. I guess it just makes more sense for me to use IntelliJ Idea and gradle which I am familiar from Android world. 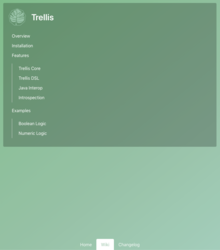 As shown in the image.

I did try adding these to config.yml but these configs don't work on Copper.

Casey Brooks
@cjbrooks12
That sidebar menu is the page menu, not the theme menu, so you'll want to populate it through one of the relevant archetypes. For those Trellis docs, specifically, here's the config that sets up the sidebar menu. You would want to put kotlindocPackages' and 'kotlindocClasses' under thekotlindoc.pages` archetype key, for example

ssiddh
@ssiddh
@cjbrooks12 thanks for the response, I tried adding the config similar to Trellis docs, as you can see in the snippet above. I wasn't able to get a menu for the wiki pages. Tried following the instructions mentioned in the link you provided, that didn't work either.

Casey Brooks
@cjbrooks12
Is the snippet you posted the exact config you're using? It looks like it should work, but I'll take a closer look tomorrow. Have you confirmed that the wiki/kotlin pages are being created properly (they should show up in the admin panel if they are). And if you have a link to the repo, that would be helpful for me to find out what's going on too.

ssiddh
@ssiddh
Yes it is the same config being used. Yes Wiki pages and kotlin doc pages are being created, can see the summary when I click on wikiSections (wiki) menu item and can navigate through the wiki. Kotlin pages if I type in the path to documentation pages I can see it.
As for linking the repository, it will be difficult as it is a private repo.

Sudhir Khanger
@sudhirkhanger
How can I remove the hamburger menu from the right-top corner?

Thanos Psaridis
@ThanosFisherman
Hello, I just discovered orchid and got really excited about it. I'm actually trying to convert a jekyll blog into orchid. I'm having a pretty hard time though. I will come back with some questions soon. Happy new year to you all.

Casey Brooks
@cjbrooks12
Hey all, sorry for the delay in getting back, it's been a busy holiday season. Also, I will be on vacation without internet from Jan 4-11. Feel free to post questions here during that time, but I won't be able to answer them until I get back. Thank you for your patience.
@ssiddh I was finally able to figure out the problem with your Copper theme config. The Trellis site is on version 0.16.x, and it looks like I renamed the wiki layout to index_menu but missed that change in the 0.17.x release notes. Try using index_menu as the layout and it should work.

@sudhirkhanger You can customize the CSS for any theme, adding CSS to change or hide elements as-needed. See here for docs on adding additional CSS to your theme.

Alternatively, you could override the layout template and remove/change anything you need to in that. It sounds like you're using the FutureImperfect theme, so you would copy this file to templates/layouts/layoutBase.peb in your site's resources and make any changes you want to that file.

@ThanosFisherman I'm happy to answer any questions you have! I'd also like to hear your specific pain-points in migrating from Jekyll to Orchid, so I can work to improve documentation, fix issues, or eventually create migration tools for those specific areas.

@cjbrooks12 Thanks Casey. It would be nice if there was a tutorial on how to create your own themes. I understand that you can include the themes as a gradle dependency but that doesn't help if you want to create something from scratch. I realized that I had to create a multi-module gradle project for my use case so I took the contents of BsDoc directory from orchid's source code and included it as a module to my project so I can tweak it a bit. I think this process should be documented. Now when I try to run the project using ./gradlew orchidServe I get the following error:

I'd appreciate if you had a look at my repo and tell me what's wrong with my gradle config as I'm not familiar with gradle-kotlin scripts yet.
https://github.com/ThanosFisherman/orchidBlog

@ThanosFisherman Yeah, I really need to get some docs written for custom theming. Overall, using a custom theme isn't much different from customizing existing themes, so the docs on templates is most of what you need for building layouts, and JavaEden/Common repo docs for adding configuration options to your Theme class.

In addition, you don't need to use a separate theme module, unless you want to share the theme among several sites. Strikt.io is an example of a site built using a custom theme, and it's pretty simple so it's another good guide for making your own theme (see sources here). The way your project is set up, with a separate theme module, is perfectly correct, but you can also save some boilerplate by putting the theme in the same module as the site as in the Strikt site. Templates will also be live-reloaded in the local project, unlike in a separate project (since the theme jar needs to be rebuilt to template changes to be recognized).

Thanos Psaridis
@ThanosFisherman
@cjbrooks12 Thanks for the tips and links. I think I will follow your advice and move the contents of "theme" module into one "site" module just like Strikt. Btw I like how Strikt manages both its kotlin libs and its site all in one project with submodules for each. Now that I am all set I'm going to finish the tutorials section and learn more about pebble templating and configurations. I may bother you again with some more questions in the future.

ssiddh
@ssiddh
@cjbrooks12 thanks a lot for solving the menu issue. I am still not able to link kotlin doc pages did you figure it out?

What problems are you still having with it? I am able to get a sidebar menu populated with the kotlin class/package links just fine.

For version Copper theme v0.17.6, the sidebar menu is displayed when a page uses the index_menu layout, and the menu items in that sidebar are from the page menu. Something like the following will set the layout of all pages to index_menu and add the menu items to that menu to be displayed: