Rikuo Hasegawa
@sp4ghet
what would you say is the minimum required dosage accuracy for the minimum dosage?
±1ml/min?
I'm sure the smallest dose we can get is just like 1 drop, but getting 1 drop and not 2 drops every time will be hard

That’s the recommended feed chart for the nutrients
So somehow we need to make that achievable in a realiable way. Dilution of nutrients is not out of the question either

Jake Rye
@jakerye
of dua a/b, but some of the other supplements are ml
*1 ml

Jake Rye
@jakerye
as long as we set a spec that is reliable we can work with that. 10ml +/-1ml would probably be fine
also somewhat unrelated. does usb cam node crash on the ML bot?

Rikuo Hasegawa
@sp4ghet
yeah..
I think so
We usually get Error 19 no such device /dev/video0

Jake Rye
@jakerye
do you guys want to try out a quick standup this morning?

Rob Baynes
@rbaynes
as long as I can do it sitting down :) nobody but me here at the moment

Rob Baynes
@rbaynes
@jakerye @Spaghet we can do a standup anytime

Rob Baynes
@rbaynes
one sec, let me find a room

Rob Baynes
@rbaynes
we have first friday lunch soon, jake, if we are non-responsive when you return, that is why

Jake Rye
@jakerye
ok thanks for the heads up. sorry to bail. got sucked into compiling some documents….

Rikuo Hasegawa
@sp4ghet
@jakerye I got 2.25ml/min at a accuracy of about 0.25ml
I don't think it can get much smaller
Anything past 40 stays super stable
I will experiment with stuff inbetween 40 and 2 but it seems fairly linear 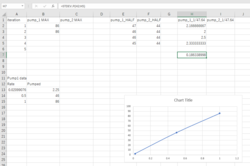 Rob Baynes
@rbaynes
Nice job @Spaghet ! I suggest you write up this in the wiki as a formal “pump test/calibration procedure”. After you have a few more data points, we can do the same test on another bot to see if they are the same.

Adrian L. Lu
@AdrianLLu
Hi everyone, Firstly thanks to those who have shown their support for the Digital Farm Lab! It means a lot to us.
I have a question about the brain. A few of us in the community have been working with it but, as you know, it's going through some changes now. I'm wondering how we should move forward with working with the brain? Should we hold off? Is there a version that we can put together?

We finished building two V2 kits from Fenome about two months ago here in STL. I have not yet been able to install from docker and flash successfully (the consensus on the forums at least is that that isn't currently working)? I have gotten a successful source install and launch of the brain about a month ago following Juhnke's documentation on the forums, but was unable to ever connect to the UI or view the webcam. I've been trying for the last month to get an install unsuccessfully.

I definitely want to second @AdrianLLu's question: should I just hold off on trying to run the brain? In addition, it sounds like the decision is to move away from the current Pi/Arduino hardware, so I'm a little concerned the V2.01 release won't even work with our current kits.