J. SK
@JSSS
guys, how do you like scilla/ zil stack so far? I'm new here

Cameron Sajedi
@csajedi
@JSSS If I'm 100% honest it is rough around the edges. I have great hope, but today none of the sdks I've tried are without hiccups/quirks. Scilla compared to other sc langs (michaelson and solidity) is cumbersome but realistically the benefit of formal verification (eventually) massively outweight the ECMAscript-inspired familiarity of solidity. Looking forward to exceptions and testing out the procedures that were recently added. Now if only the vscode plugin could pair => and transition()... with its corresponding end . Then I'd be much happier

Cameron Sajedi
@csajedi
Can someone send me testnet (or mainnet) zils? the testnet faucet has never worked for me. I tried both old and bech32 addresses
addr -> zil1v9wyh8vlpsff7kuy9kjlumdyfja808vxaglthm

kishankumar258
@kishankumar258
How much time does it take for sending zils from one address to another on the local network? In my case it is taking approx 1 minute.

kishankumar258
@kishankumar258
How to increase the number of nodes in private network? I increased it from 20 to 50 in pre_run script but now all nodes are not connected.
What changes do I need to do in the test_node_simple script?

Hybridverse Blockchain
@Hybridverse
Sup people, I know that is planned to add a privacy layer on ZIL
How would that work? will it be possible to run private smart contracts and create privacy coins?

Amrit Kumar
@AmritKumar
The first step would be to add libsnark and expose functions in Scilla that will allow ZK proof verification.

Hybridverse Blockchain
@Hybridverse
Maybe are too simple questions, what I want to know is how the end product could look like on the user/dev end, what a user will need to do to implement privacy solutions on ZIL? Install the library? Will it be full or there could be constraints (example things that can be done only on the "main" chain)
Teorethically would be possible to build everything that can be built now but in "privacy" mode? I repeat maybe are too simple questions and is early for this features but it looks super interesting
Assuming that the feature is out, as user end, how would it look? I assume there would be a dedicated block explorer as well

Hybridverse Blockchain
@Hybridverse
I'll ask during AMA
These questions are surely simple, I would love to have a general idea of how it can be and what can be done
As of now I only tried Dero which has privacy by default and is possible to build private Dapps

Hybridverse Blockchain
@Hybridverse
But with this on ZIL I'm really wondering, guess I'll wait for some docs about this when there's more, btw that also is great, can't wait to see

I thought the cumulative_gas in Zilliqa is different from Ethereum.

Miroslav Michálek
@mmich95_twitter
Hello, is that way how to get all zil addresses via viewblock API ?

DaoChemist
@DaoChemist_twitter
Hey everybody, we're considering starting bi-weekly calls for the Zilliqa dev community. We created a quick survey to gage the community's interest and the topics we should bring up during the call. So, please take a couple of minutes to fill out the survey, I'll be collecting the results all week and looking to set the first call next week:
https://www.surveymonkey.com/r/L63X9TW

Cameron Sajedi
@csajedi
In the light of the dev community calls, maybe it makes sense to switch to discord. It is quite common, although my only major concern is that I like to have a feed (like TG) where regular folks can go and discuss, post memes and a separate dev channel that I can rely on being able to catch up on if I am gone for a couple days. TG general gets like ~200 messages an hour - that will stifle dev conversations as they won't happent o be around at the same time. The lack of threading in gitter chats has already shown itself to be a bit painful in that respect

DaoChemist
@DaoChemist_twitter
Thanks for the feedback Cameron. I agree, if we create the proper channels, we can foster more meaningful conversations on specific topics, and make those convos easier to keep up with and participate.
I'll share the results of the survey during the community dev call. I don't have a specific day yet, but it will happen sometimes next week, prolly Wednesday or Thursday.

linyudong0001
@linyudong0001
I've done some tests in the scilla IDE, but the contract call cost is too high. It's just for testing, is not it?

linyudong0001
@linyudong0001
It would be great to have a document that compares the cost of actually consuming the same functionality with other platforms (tron, eth). There will be no recurring questions and it will be very helpful in choosing zilliqa. 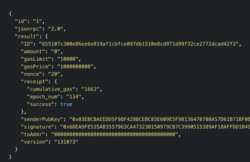 Hey Bro, I have a question. is the "success" field the only way to judge the transaction is valid or invalid? Is there any other way to "fake recharge"?

DaoChemist
@DaoChemist_twitter
Hey everybody, we're having our first dev call this Friday 9 am Singapore time ( 9pm EST), here is the invite:
https://calendar.google.com/event?action=TEMPLATE&tmeid=M2VvODdxMTEybzdpM2w5cWk4cmgwY2xxOG8gZ2FyZXRoQHppbGxpcWEuY29t&tmsrc=gareth%40zilliqa.com

vamshi-gudipudi
@vamshi-gudipudi
Can Zilliqa upgrade to achieve similar capabilities as Elrond and Harmony?
How difficult is it? Is this on dev radar ?

李大狗
@leeduckgo
how can I run ZIL node on mainnet?

There is only a piece about "Boot up a local testnet for development"
https://github.com/Zilliqa/Zilliqa