Jordan
@SoundLogic
hey just wondering if you saw my comment on a8m/angular-filter#74
I have the changes and unit tests sitting on my computer :worried:

Ariel Mashraki
@a8m
@SoundLogic saw it now.
mm.. what are you waiting for ? make a PR. haha

Jordan
@SoundLogic
haha ok yeah I kinda forgot about it until I saw you made a gitter
will submit today or tomorrow, latest

Jordan
@SoundLogic
build failed: https://travis-ci.org/a8m/angular-filter/builds/51419882
I'm not sure why this is happening, but I had to modify the karma config files to run on my local machine - I didn't check those in so I'm surprised to see the build is failing.. wondering if it could have something to do with line endings?
looking at the diff I'm not sure what else it could be - tests were passing for me
Warning: Task "karma:build" failed. Use --force to continue.
Aborted due to warnings.
npm ERR! Test failed. See above for more details.
npm ERR! not ok code 0
any ideas?
(I should have done this on my mac...)

Pulkit Singhal
@pulkitsinghal
Not sure but doesn't hurt to ask ;)

Darrel O'Pry
@dopry
I'm working on an update to range...
but grunt test is dying on karma build...
I'm on windows 8.1 with node 0.12. Gonna poke at it a bit. wondering if anyone else had run into the same

Darrel O'Pry
@dopry
figured out what as going on.. The coverage reporter was hiding all the cli output. commented it out and got my stuff done.

wedev123
@wedev123
is there a way to do groupBy on multiple properties?

Sibelius Seraphini
@sibelius
hey @a8m can I help you merging some pull requests?

Jeremy Carlsten
@JeremyCarlsten
So I just realized that filter differs in it's self. I've got an object and a search term; however, I don't want to search on one of the object's properties. If I use filter: { fname: term, lname: term } It acts as an 'and' but if you use the entire object filter: term it works like an or.... I need the or but without one property. Ideas?
nvmd got it.

Andreia Silva Aguiar
@deiasilvaaguiar_twitter
html
I am sorry if I am doing the basic question, but I am very new with angularjs 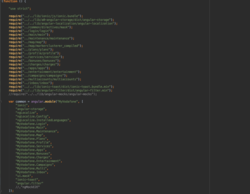 hi ppl! i have a question about injecting angular-filter
this is my init file
where i connect all my modules
but this one is somehow not working
all the directory path is correct, do you have some advice?
thanks

Hello - hoping someone can help me out here.
say I have the following object set to var addressResults =

I want to filter on the Address field using the Street Name provided in the search form which is set to a var called streetName.
In my Angular Ctrl would it be a line like below??

For example if I wanted to filter on the Street Name 'Calibre Creek'.