Eugene Ghanizadeh
@loreanvictor
no no worries actually I greatly appreciate this, it's surprisingly not easy to find people with good insight on these topics
as for micro frontends,
since the support for
custom events is really prevalent amongst browsers now, I suspect making it the default for component interactions coupled with deprecation of layers such as VDOM automatically leads to that result
(sorry the mobile web interface of gitter is
not the best)
and for backened,

Eugene Ghanizadeh
@loreanvictor
I suspect on the data layer there is a need for a query representation scheme that allows for efficient remote subscription support (which I think there was already a white paper claiming to prove its not absolutely possible but it might be approximately possible to a sufficient degree),
and coupling that (if such solution exists) with these concepts would truly change how we manage data flow.
and I will definitely check out that project first thing in the morning,
it send quite promising

I just fell in here from the HN thread. I just discovered this field and it's so surprisingly close to the coding methodology I have been stumbling towards for some time and I'm delighted. I got really into using concatenative programming styles in TS (enabled via ramda and lodash/fp) and this is such an obvious next step - I'm also (embarrassingly) just coming to RxJS now, but skilling up very quickly as this fits how I was already thinking.

Is anyone working on using Connective+RxJS to do Behaviour Programming?

Eugene Ghanizadeh
@loreanvictor
@elmarsto could you elaborate a little bit more on what you mean by "Behaviour Programming"? and I guess this also means that perhaps not and it would be so great if you could start such a lib. I am personally just barely aware of what the concept generally means, but at least what comes to mind is pretty interesting and would be glad to offer whatever help I might be able to provide on that endeavor as well (though again it might be limited due to lack of experience on the topic)

Ghost
@ghost~5d6aaa6ed73408ce4fc9b47a
@loreanvictor 水写纸
oops wrong paste
one ec
sec
http://www.wisdom.weizmann.ac.il/~bprogram/
(the first is apparently the kanji for a form of calligraphy practice paper I am unrelatedly attempting to procure)

Eugene Ghanizadeh
@loreanvictor
:smile: :smile:
@elmarsto yep that page is basically all I know, are there any examples of how it would look like in practice? I find the concepts super-interesting, but cannot distinguish properly between this and event-based multi-agent programming (which is basically what CONNECTIVE tries to provide specifically through the concept of agents).

Ghost
@ghost~5d6aaa6ed73408ce4fc9b47a
Yeah they are very similar, I see BP as an ideology to employ when coding with connective
But most extant BP libs for JS at least are nowhere near where Connective is

Eugene Ghanizadeh
@loreanvictor
could you provide an imagined sample code utilizing the lib you have in mind?

Ghost
@ghost~5d6aaa6ed73408ce4fc9b47a
so the (to me obvious) idea is to leverage the power of connective to produce a better behaviour programming toolchain
@loreanvictor Not quite yet, I'm still trying to articulate my vision, but what I have in mind is like a scenario where your BP 'threads' (connective agents) are all implmented as connective compositions 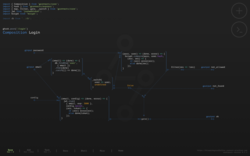 something like this?
of course this doesn't match the current API of connective perfectly as it was one of those imagined samples (though not traditional "code" precisely)
oh wait, perhaps what you are referring to are tools that help with decoupling independent behaviors (of an agent for example) into separate compositions, right?

Ghost
@ghost~5d6aaa6ed73408ce4fc9b47a
Tentatively yes, but I arrived at connective + rxjs just as I was learning BP in a React-driven context so please be patient. I only started with RxJS and connective yesterday afternoon, and with BP the previous week :)
@loreanvictor https://github.com/lmatteis/behavioral
Instead of this lib I could do bthreads as agents. The logic of blocking, etc. works perfectly with the .control mechanism on node() and expr() returns
BTW near as I can tell expr() is just a special-case node() that only has one pinout, is that right? node() is a generalization of expr()?
(newb question)
Anyway the place where I intend to try this all out is on Screeps, the JS coding game, if you play (where you build AIs and pit them against the AIs of others in JS, TS and compiled-to-wasm languages)

Ghost
@ghost~5d6aaa6ed73408ce4fc9b47a
great!
Anyway ty for this coolness I will go away and bang on it and come back with questions

Eugene Ghanizadeh
@loreanvictor
yes I still have to check Screeps out as I didn't have the chance yet unfortunately.
and actually thank you for sharing these cool ideas! the repo you shared specifically puts it in better perspective for me, so any help I can do with the lib you have in mind, I would be glad to!

Eugene Ghanizadeh
@loreanvictor
:smile: :smile: also be careful with typing on the mobile-web interface, last time I was doing that (two nights ago in this very community) every-time the browser app lost focus whatever I had typed into the chat box would be posted.

Roman
@moltar
They have an iOS app which is great and sends notifications too.

@moltar so as I mentioned (and you suggested), I have started working on a pure-DOM rendering library that nicely works with RxJS and CONNECTIVE. I considered utilizing LitElements for this project, however generally there are some bits and pieces of WebComponentsAPI that are not universally standardized (or at least it feels as such) so I basically opted for creating a library that can later be minimally modified to utilize the WebComponents API and something like LitElements for its component-based rendering (still keeping my hopes up for poor pure Polymer).

The project is basically a custom TSX/JSX renderer that produces raw DOM Elements (so no VDOM), supports minimal element lifecycle (binding, clearing up), and hence can also render Observables or Pins seamlessly (this is the step that the project currently is at). Furthermore, it should support functional components quite easily and seamlessly, from pure templates to complex components (I suspect this should be quite easy as we can just create a composition() and attach it to the rendered element's lifecycle). The overall goals of the project are:

All of this means the envisioned end-result is something like this gist.

I do not think this will be a heavy-lifting project, but still I definitely could use a lot of help on this, specifically with regards to performance optimization / example use-cases / etc. So if you are interested, do not hesitate to join in! 😎

EDIT: I mentioned Roman since he has brought up the idea before but this post is towards everyone.

Eugene Ghanizadeh
@loreanvictor
@/all support for deep states have been added. deep states allow for treating indexes/properties of arrays/objects as separate states easily, with utilities to efficiently and consistently down-propagate (e.g. from the array state to the index sub-state) and up-propagate (e.g. from index sub-state to array state) data in deeper structures. check it out if you've got the time/are interested, feedback much appreciated.
_