Ariel Rokem
@arokem
@nis02002: DIPY does not fetch HCP datasets, because we don't have a way to verify that you have agreed to the HCP terms and conditions
That said, we wrote a fetcher to get these data from AWS here: https://github.com/yeatmanlab/pyAFQ/blob/master/AFQ/data.py. It uses the DIPY fetcher infrastructure and extends it via boto3 to fetch data from the HCP open access bucket on AWS. It will require that you get your own HCP credentials. See instructions here: https://wiki.humanconnectome.org/display/PublicData/How+To+Connect+to+Connectome+Data+via+AWS

Serge Koudoro
@skoudoro
Hi @ThomasTT_gitlab, I would replace the feature : IdentityFeature instead of VectorOfEndpointsFeature() and then I will remove shape1[0] == 1 on your function are_compatible. You do not need vector in your case for MAM. Let me know if it works, otherwise create an issue on DIPY, it will be easier to help you

Serge Koudoro
@skoudoro
If you want to improve your performance, you can use bundles_distances_mam function from dipy.tracking.distances in your dist function. But I recommend that you check first your version and then compare

Eleftherios Garyfallidis
@Garyfallidis
Hi @bhsilverstein , you have to either transform the streamlines or the ROIs to be in the same space. Are you using latest release version of DIPY?
If yes, then the output of load_tractogram is offering methods to do such transform.

Brian
@bhsilverstein
Thanks, @Garyfallidis . I'm using the latest release. I use Space.RASMM to load the tracks and I've tried using the to_xxxx methods after loading, but without success. They shift the tracks, but not into the space my ROI coordinates are in.
Tho I'm seeing that the affines in the streamline and b0 headers are the same. Perhaps something's off about my ROI coordinates...

nis02002
@nis02002
Hi everyone, I download the dataset .nii file from ANDI webiste (AD pateints), however, it doesn't have b.value/b.vector, is there any I do DTI analysis?

Rob Reid
@captainnova
Hi, I followed the AFQ tract profile tutorial, https://dipy.org/documentation/1.0.0./examples_built/afq_tract_profiles/#example-afq-tract-profiles , and my final figure does not fully match the one on the page. My AF plot matches, but my CST plot has FA staying between 0.4 and 0.1 until it drops to 0 at node 100. The CST plot on the tutorial page is 0 in most places, which does not seem reasonable. Maybe it needs updating? I am using dipy 1.0.0. Thanks!

Ariel Rokem
@arokem
@captainnova : thanks for the heads up. I agree with you that something's wrong with the results presented on that webpage!
@captainnova : see nipy/dipy#1985

Rob Reid
@captainnova
@arokem : thanks for checking and starting #1985. I've updated it with my result.

nis02002
@nis02002
hi everyone, how can extra the x-y location of water from freewater DTI model? We can plot the data as image, but I also want to check the exact value of locations

tried adding 1 to the labels, no difference!

Ariel Rokem
@arokem
@nis02002 : at least two non-zero b-values, if you intend to use the method implemented here: https://github.com/nipy/dipy/blob/master/dipy/reconst/fwdti.py
There are new developments in the pipeline to remove this constraint, but these methods are not quite ready for general use yet
Hopefully in an upcoming release

_
zlf123-marker
@zlf123-marker
Excuse me, I want to know how to display t1 data and TRK files with dipy library?

Ariel Rokem
@arokem
@zlf123-marker : you should take a look at the examples on the website: https://dipy.org/tutorials/

zlf123-marker
@zlf123-marker
I have a look, but I want to display my TRK file and t1 data, I don't know what to change?Can you help me @arokem

robertl1996
@robertl1996
Does anybody know where the source code for this denoise library can be found: https://dipy.org/documentation/1.0.0./reference/dipy.denoise/. Particularly the nl means filters

Brian
@bhsilverstein
Hey folks - newbie question here: is there a simple way to concatenate data from two or more stateful tractograms into a single tractogram? I could just pull the streamlines and concatenate them, but I'd like all the metadata to come along with the streamlines.

Does anybody know where the source code for this denoise library can be found: https://dipy.org/documentation/1.0.0./reference/dipy.denoise/. Particularly the nl means filters

I have a look, but I want to display my TRK file and t1 data, I don't know what to change?Can you help me @arokem

DIPY examples/tutorials use data that is fetched directly from a few sites that host the data of interest. If you want to adapt the examples to use your own data, then, instead of using the fetch_* and read_ * commands, you will need to read your local files.

In order to read your t1, you will need to use NiBabel as in
https://nipy.org/nibabel/nibabel_images.html

Similarly, to show your TRK file, you can do something similar to this

If you want to display your streamlines and your T1 at the same time, you will need to add both actors to the same scene, adding to the above something like

Jakob Wasserthal
@wasserth
Hi, is there a function in dipy to resample streamlines to make all points have a specific distance (in mm) from each other? So longer streamlines would have more points than shorter streamlines.

Wade Weber
@wadeatUT
Hi all. When I convert my Freesurfer apar+aseg back to native space to use as my WM label file in DIPY, it won't let me reslice it. I used Freesurfer's recomendations to go from Tal back to native space and to convert to NIFTI. When I load that file into DIPY and use DIPY's reslice command (from 0.8mm to 2mm), it looks like it's processing, but the shape and zooms haven't changed. Is there something special that I have to do with data converted from Freesurfer? Thanks!

Shreyas Fadnavis
@ShreyasFadnavis
Hi @wadeatUT, Can you share the piece of code where you are reslicing the data.. I don't think anything special is needed.. it would be helpful to see what the exact issue is!

Wade Weber
@wadeatUT
@ShreyasFadnavis Thanks for the help. Here's a screenshot of my Jupyter Notebook: 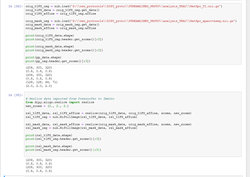 Shreyas Fadnavis
@ShreyasFadnavis
@wadeatUT I guess this line is missing: zooms = orig_t1FS_img.header.get_zooms()[:3] and should solve the issue!

Hi everyone! The DIPY Workshop 2020 Early Bird registration ends in 3 days! To all those interested, visit: https://workshop.dipy.org/ | for any questions mail us: dipy@python.org and for updates, follow us on Twitter: @dipymri !! Looking forward to see you in March at Indiana University Bloomington!

Scott Trinkle
@scott-trinkle
quick visualization question. is there a way to get different segments of individual streamlines to have different colors? right now the default "directional" colormap seems to give the whole streamline the same color based on the overall direction, but I would like to see how the direction changes across long streamlines