Andy Ayers
@AndyAyersMS
Thanks for the fixes. Some of the other components we build out of the LLILC repo will be useful in getting CoreRT to work on NetBSD.

Kamil Rytarowski
@krytarowski
CoreRT already builds without patches on NetBSD. I just got LLILC to compile as well.. I had to disable -Werror for now, too many unused variables around. At the moment I will focus on small patches blocking build -- so one more patch to go to get it buildable and I will follow up with elimination of warnings.

Mukul Sabharwal
@mjsabby
@AndyAyersMS @JosephTremoulet Do you guys know if anybody internally (or externally) has gotten LLVM to run on Win10-ARM? I haven't tried, just trying to get a feeler if it's going to be work, I suspect not ...

Big Jake
@jakesays
hey i have a need to translate .net assemblies in to llvm IL. would llilc be useful for such a task?
er, llvm ir

Andy Ayers
@AndyAyersMS
It could be, depends on what you are really trying to do. LLILC understands basic IL semantics fairly well.

Big Jake
@jakesays
@pragmascript iirc it will eventually be an open source alternative to the .net native compiler
@AndyAyersMS hey just noticed your response from the 29th. thanks.

Macaque Chen
@Samana
Hi! Haven't seen activities on this project for a couple of weeks... You guys taking a vacation? Or is it because of the merging of Xamarin? O_O

Andy Ayers
@AndyAyersMS
@Samana Most of us are now helping get RyuJit ready for the first official CoreCLR release....

Alex Forster
@alexforster
hey language team thought leaders: semi-off topic for this channel, but has a safe, low level GC-less systems language ever been considered? something with C# syntax plus the language features that make sense, with Rust-esque ownership/lifetime semantics

pragmascript
@pragmascript
This project seems to have disappeared from the roadmap: https://blogs.msdn.microsoft.com/dotnet/2016/07/15/net-core-roadmap/
does this mean the project has been postponed/canceled?

Andy Ayers
@AndyAyersMS
Perhaps, but there are some big challenges that really need focused effort. GC and EH in particular.

Big Jake
@jakesays
hey any ARM experts around? i'm trying to figure out how to disable VFP and can't find any info on it. thought perhaps there might be an arm person around that might know.

Russell C Hadley
@russellhadley
@sirinath , we don't have a date when this work will start up again. We're still consumed with some other milestones. And as to when this would get to a production ready release, that is currently not defined.

Demi Marie Obenour
@DemiMarie
@russellhadley what are those milestones? (Just wondering because currently C# is too slow for some tasks – that is the reason for some of the FCalls in System.String, for instance).
@russellhadley am I correct that the CoreCLR team does plan to finish LLILC?

José Simões
@josesimoes
can please someone from the team update us on the current status of this project? any timeframe to get this rolling again?
I'm looking for support for small ARM processors and I'm willing to contribute

Peter Tiedemann
@petertiedemann
Also wondering if this is completely dead, or just put on pause?

Big Jake
@jakesays
hello...
will llilc ever see the light of day?

As far as an LLVM based upper tier goes -- obviously we have looked into this to some extent with LLILC, and at the time we were in frequent contact with the Azul folks, so we are familiar with many of the things they were doing in LLVM to make it more amenable to compilation of languages with precise GC.

There were (and likely still are) significant differences in the LLVM support needed for the CLR versus what is needed for Java, both in GC and in EH, and in the restrictions one must place on the optimizer. To cite just one example: the CLRs GC currently cannot tolerate managed pointers that point off the end of objects. Java handles this via a base/derived paired reporting mechanism. We'd either need to plumb support for this kind of paired reporting into the CLR or restrict LLVM's optimizer passes to never create these kinds of pointers. On top of that, the LLILC jit was slow and we weren't sure ultimately what kind of code quality it might produce.

So, figuring out how LLILC might fit into a potential multi-tier approach that did not yet exist seemed (and still seems) premature. The idea for now is to get tiering into the framework and use RyuJit for the second-tier jit. As we learn more, we may discover there is indeed room for higher tier jits, or, at least, understand better what else we need to do before such things make sense.

Macaque Chen
@Samana
@JosephTremoulet Thanks! How about the AOT part? 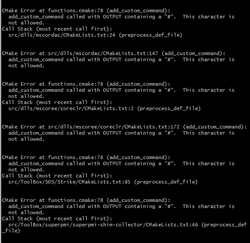 eyo, anyone seen this issue before?
trying to build CoreCLR

Jessie Lesbian
@jessielesbian
Can someone send me the binaries?
_