Ultra XBT
@UltraXBT_twitter
Working with Frame on rinkeby but the log-in sidebar disappeared and now won't let me test my Aragon fundraising testnet server. What should I do to log in?

RikaSukenik
@RikaSukenik
I'm new to frame and wondering how you handle private keys. Do they ever leave the hardware wallet? If not, how do you gain access to them for signing?

Jordan Muir
@floating
If you're using a hardware wallet Frame will talk to the device directly. When something needs to be signed that data will be sent the device, the device will sign it and send back the signed version to be used by Frame. Frame will never touch the private keys of your hardware device.

ligi
@ligi
with foam FRAME crashes: floating/frame#286
what dapps does frame work with?

Jordan Muir
@floating
@ligi Is the peepeth client open source? I should be able to figure out what's going on pretty quickly if I can take a look. Lots of people use Frame every day with many dapps. I only know of one other dapp that was reported to have issues similar to this peepeth issue.

Jordan Muir
@floating
The other app that was hitting this issue was also not open source. Would love to get to the bottom of it.
The FOAM issue seems to be different
@ligi One quick solution to it could be resetting all settings and permissions. You can do this by going into the settings (>>>) and mousing over the very bottom.
And click "reset all settings and data"

Jordan Muir
@floating
I just saw your response in the thread. It could have been a bug with a state transition running form source. We only handle/test migrating state schema changes between released versions so it's possible your state was in a bad place from running a previous, transitory version of Frame.

_
Jordan Muir
@floating
This isn't needed, hot wallets are now supported by in the official releases.

ligi
@ligi
peepeth seems to be doing something like this:
window.web3=new Web3(window.web3.currentProvider)

Jordan Muir
@floating
Yeah, that should be ok. Running window.web3.currentProvider.send('eth_accounts').then(console.log) in the console on https://peepeth.com/a/login works fine.

Jordan Muir
@floating
@ligi Sounds good. They may be using an older version of web3 and relying on synchronous "async exceptions" https://github.com/MetaMask/faq/blob/master/DEVELOPERS.md#dizzy-all-async---think-of-metamask-as-a-light-client that metamask still supports but are not part of the EIP-1193 spec or web3 > 1.0

Jordan Muir
@floating
@ligi localethereum seems to be working fine for me
Where is it saying not connected?
In settings (>>>) make sure you're currently connected to mainnet

Jordan Muir
@floating
@ligi It looks like you're running an older version of the browser extension. Try updating to 0.1.5 https://chrome.google.com/webstore/detail/frame/ldcoohedfbjoobcadoglnnmmfbdlmmhf

ligi
@ligi
unfortunately with this version I cannot switch the provider on
https://youtu.be/YFvETl5KqWk

Jordan Muir
@floating
@ligi The provider/extension is always on now, it can be toggled off/disabled in the chrome extensions menu

Aaron Foster
@pythonpete32
hey guys. Im running into an issue with using frame in a Rinkeby DAO
so i was able to launch the DAO signing all the required transactions
but when it comes to interacting with the Apps they are not recognising frame. which is weird because the client still has me connected (in the top right it has my account, network and the green dot) 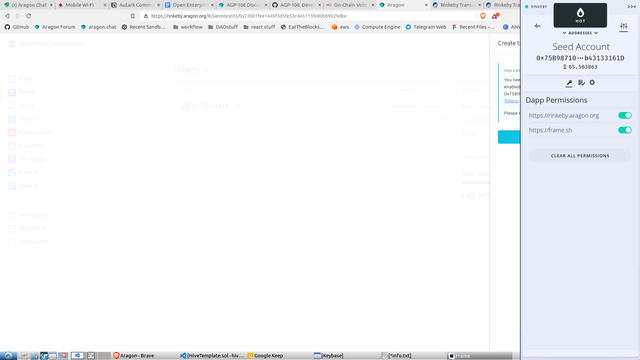 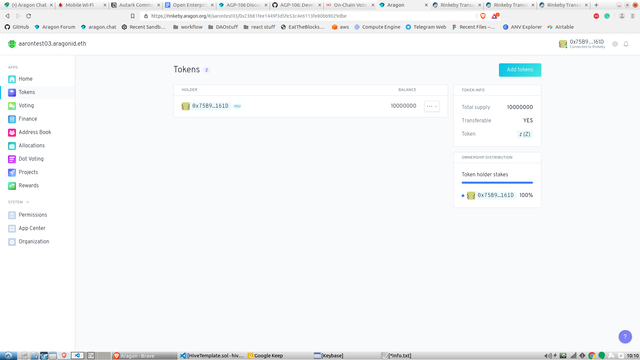 Jordan Muir
@floating
@pythonpete32 Hey Aaron! Sorry for the delay. Can you explain what you mean by dapps are failing to recognize Frame and which dapps this is occurring with?