Ali Shirvani
@alishir
Hi, I'm new to gprMax, I want to simulate magnetic field around a simple solenoid, would you please guide me? Where should I start and how should I proceed?

Antonis Giannopoulos
@agianno
@alishir Hi Ali, FDTD which gprMax is based on might not be the best method for simulating such problems. Try to find an example similar to your problem and see what methods other people have used to simulate this. FDTD is primarily good for transient wave problems.

Ali Shirvani
@alishir
Actually I want to simulate the force that a solenoid apply on a plunger.

Ali Shirvani
@alishir
Thanks for your guidance

better1002
@better1002
Could not find conda environment: gprMax
You can list all discoverable environments with conda info --envs.
I have a problem with runninig gprMax

John Hartley
@jasminium
Hello. gprMax has some dependencies. These are installed into a local environment called gprMax using the conda command line tool. First you should install conda then run
Install the environment from the .yml file. The process ocumented here http://docs.gprmax.com/en/latest/include_readme.html. If you have an error please post it here.

I have followed the instructions in the documents, and when I used the "conda activate gprMax", I got the error:

gprMax 3.1.4 is already the active version in easy-install.pth
Installed /home/tony/miniconda3/lib/python3.7/site-packages/gprMax-3.1.4-py3.7-linux-x86_64.egg
Processing dependencies for gprMax==3.1.4
Finished processing dependencies for gprMax==3.1.4
(base) tony@ubuntu:~/gprMax$ conda activate gprMax
Could not find conda environment: gprMax
You can list all discoverable environments with conda info --envs.

Craig Warren
@craig-warren
@better1002 @jasminium there is an issue with the current conda environment and Windows. We currently have a dependency on OpenBLAS which is not easily installable via conda for Windows. Am looking into ways around it.

Antonis Giannopoulos
@agianno
@craig-warren @jasminium Maybe we should recommend the Windows Subsystem for Linux for Win10?

better1002
@better1002
I get the gprMax from the github again, and problem solved, thanks! @jasminium @craig-warren @agianno

John Hartley
@jasminium
@agianno @craig-warren I have been using Windows Subsystem for some time now and haven't had an any issues. I have not tested the GPU code though
also it could be an idea to provide a docker application?

better1002
@better1002
I want to know how to get the geometry view of my simulation models , what's the command? thanks

Craig Warren
@craig-warren
@better1002 please read the docs, there is plenty of information and examples that show you how to do this - http://docs.gprmax.com/en/latest/output.html#geometry-output 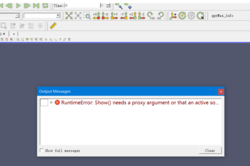 Craig Warren
@craig-warren
@Alex-VVV it is possible, but not particularly elegant. You would have to define a new material for each new position. Could be done programmatically using Python in the input file, but really depends on how much variation you have as to the number of materials you would need to create.

Siyuan CHEN
@yohanncsy_gitlab
Question for snapshot : I can create many files of images, whose format is .vti, and they will give me a 'video' in paraview. But how can I read the data in every filename.vti ?

bsesasts
@bsesasts
Hello, I would like to ask, if setting the Hertz dipole in gprmax can accurately calculate the specific field strength at a certain distance, why is the theoretical result of my calculation very different from the simulation? I will be very grateful if someone answers

Antonis Giannopoulos
@agianno
@bsesasts Our analytical comparisons with the solution of an infinitesimal dipole are pretty close (http://docs.gprmax.com/en/latest/comparisons_analytical.html) I don't understand why yours are different. Be aware that when you specify the waveform on gprMax for a Hertzian dipole you are specifying the current that runs on this dipole and not a Voltage source gap used to excite that structures of models of real antennas Akshay Rathod
@AkshayRathod449_twitter
I have come across a paper regarding tree interior imaging to find whether it is hollow or not. I am trying to implement using sfcw waveform since practically it is more realizable. Can I get some support in simulation before I make hardware? sfcw waveform generation, antenna parameters, bistatic system, B scan, and data processing. I work in a research lab and we look forward to developing the hardware.