kristjan-brezovnik
@kristjan-brezovnik
Hi! I'm completely new to Hanami and basically only style the frontend. To that effect, I would like to use the LESS preprocessor. I've looked though the manuals, but can't seem to figure out what exactly I'm doing wrong. In my 'app/testapp' folder I have downloaded the 'less.js' file and put it under 'assets/javascripts' and in my 'styles.css.less' stylesheet (under 'assets/stylesheets') I put a very simple #header{font-weight: bolder;} declaration to test it. I've also added <link rel="stylesheet/less" type="text/css" href="styles.css.less" /> and <script src="less.js"></script> tags to the app's 'application.html.erb' file. The style is not applied, so now I'm a bit lost. Anyone have any experience with LESS or can point me in the right direction? I could work with SASS or SCSS, if it's easier.

Sebastjan Hribar
@sebastjan-hribar
@katafrakt thank you, will try that. Will have to rethink the use case though if it's worth implementing, since it would effectively not be changed often is at all for one end user. Might as well make the config before deploy.

Sebastjan Hribar
@sebastjan-hribar
@katafrakt On a second note if we setup an AJAX call to a language selector on the UI then users could also make adhoc locale changes, provided we set locale before each action.

Kai Kuchenbecker
@kaikuchn
Folks, I just learned that Ruby 2.7 preview has Enumerator.produce and I'm loving it. Why isn't there more noise about this absolutely fantastic (experimental) addition to Ruby? Check it out
With this I'll never have to write a while loop again x)

Matt
@matt-from-toronto
i just took a look through the guide, hanami looks frickin awesome. congrats all! really love how repositories and entities are separated (i hate models in rails), and love the interactors concept too, callbacks have been very painful for me to work with
i'd love to know what are the some impressive apps built using hanami that are currently being used in production. i've taken a look through http://awesome-hanami.org/#awesome-hanami-hanami-project-list and am wondering if there's more to add to that list

calebbarde
@calebbarde
Hi all - a silly question likely - but coming from Rails and AR, I'm used to validation at both a request level and a model level. Is it idiomatic in hanami to have entity validations (in additions to the automatic schema validations)?
Is there an "idiomatic" hanami project on http://awesome-hanami.org/#awesome-hanami-hanami-project-list (stolen from @matt-from-toronto :) ) that would be a good one to reference overall?

Matt
@matt-from-toronto
@calebbarde you can add custom scheme validations to an entity it seems. https://guides.hanamirb.org/entities/custom-schema/ what validation do you want to add that can't be covered by schema validations, whether automatic or custom?
actually I think I've misunderstood your question
I'd also love to know if there's an idiomatic hanami project, I haven't stumbled across one yet FWIW

Custom schema takes precedence over automatic schema. If we use custom schema, we need to manually add all the new columns from the corresponding SQL database table.

Which is unclear to me. If I use custom schema attributes, does it completely override the other columns? Or can I use both - sometimes its just nice to have some overlying business logic validations to ensure bad data cannot enter the persistence layer at that boundary

Hah I feel you on the hanami project search, I really enjoy the ideas of Hanami, but its small compared to rails obviously :)

Sebastjan Hribar
@sebastjan-hribar
I'm getting a strange error: Sequel::InvalidValue at ArgumentError: no time information in ""
When trying to create or read the affected entity. The entity has two DateTime attributes describing the start and end of contractual relationship. I can't find to many useful resources online. In migration, these fields are defined the same as the default ones for created_at and updated_at. Can someone shed some light on this? 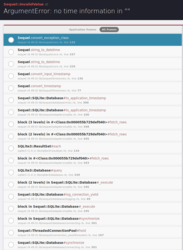 This is the error stack, the top of it, at least...

I've just moved db to postgres and it works fine. Any thoughts? I'd like to keep to sqlite for dev.

Kai Kuchenbecker
@kaikuchn
@calebbarde I think the guides do mention that validation at the model level is way too late and instead in Hanami it is idiomatic to validate at the boundary (i.e., in the action or an interactor to which the action delegates.) Should be mentioned somewhere here
So instead of accepting anything, and handling all possible values everywhere throughout a workflow and only validate when writing to the database, we first validate that inputs adhere to our expectations and then start the workflow which becomes so much simpler and less error prone.
As for an idiomatic example application.. I dunnow x(
There is https://snippets.hanamirb.org/ as a repository for example solutions to common problems
But it's still rather thin.. I really need to write more snippets x)
If in doubt just ask here and people will discuss solutions

_
Sebastjan Hribar
@sebastjan-hribar
RE my Sequel error: the same code with same gems works on one machine and not on another.

Kai Kuchenbecker
@kaikuchn
Maybe one system uses 32bit version, other uses 64bit, or some such difference

Kai Kuchenbecker
@kaikuchn
Another possible cause is the data that's in the DBs (if any). If you look at the quirks of SQLite the flexible typing sticks out as a possible cause.. https://www.sqlite.org/quirks.html
I mean SQLite does not have a separate Datetime datatype and instead may store such data as text, int or real.
The error you receive looks like it's text in your case and that there's a row that simply contains no information

Sebastjan Hribar
@sebastjan-hribar
@kaikuchn I've checked everything above you mentioned and after applying the same DateTime format as described in the quirks and as used by the default created_by, it works on my machine. Before it didn't work even with date picker w/o any manual input. We'll probably move to postgres since we'll have a lot of dates and times to deal with. However, it's still unclear why different formats work differently on different machines.

Kai Kuchenbecker
@kaikuchn
I generally don't recommend using different databases between development, test, staging and production. Of course you're not going to employ a 25 node, sharded, highly available Cluster in development but one should still strive to have an environment as similar as reasonably possible between stages.
That way one can catch errors/problems early and many other problems that occur by having differences between environments can be circumvented.
Of course there's always cases where you may accept differences for convenience or other benefits. For instance we use Citus in production and when we started out migrating from MongoDB to Citus we also had 3-node clusters running on our local machines via VMs. But that was so goddamn slow, when we finished the migration and started to rarely touch the Code relating to Citus anymore we replaced the Cluster with a simple Postgres in development where we faked the Citus API (Citus is a Postgres extension which gives you horizontal scaling via sharding), accepting that if we change some SQL / calls to Citus we may not catch all errors, but trusting that our CI will, we made that tradeoff for a faster test-suite. (12 minutes -> 3 minutes, yeah VM networking overhead on OSX plus obviously a little more work by the DB, i think latency in production between nodes was less than 5ms consistenly but 100ms plus with our VMs)

What are you using for alternatives to FactoryGirl? I've found references like cranky and blacksmith that don't dependent on AR.

Sebastjan Hribar
@sebastjan-hribar
I mean what are you all using as an alternative to FG? :)

Jeff Dickey
@jdickey
@sebastjan-hribar Have you taken a look at Fabrication? We switched to it from FactoryGirl when we were still a Rails shop, and it plays very nicely with Sequel and other ORMs as well.

Kai Kuchenbecker
@kaikuchn
Yeah, I've a high opinion of fabrication as well. It felt cleaner than FactoryBot to me.

Jeff Dickey
@jdickey
Agreed. A real pleasure to work with
...and only used the old name because that's what it was when we switched. I, too, prefer the new name, but oh well

Kai Kuchenbecker
@kaikuchn
@kristjan-brezovnik sorry I've only worked with APIs. So I have no hands on setup experience with Hanami and Assets. But maybe I can still help. Could you share the relevant settings you've made in a gist? As well as what errors you get, if any?

Paweł Świątkowski
@katafrakt
SASS should probably work out of the box: https://github.com/hanami/assets/blob/1754cb09da4e49b5946e12cf7b5cc4f37ba9564f/lib/hanami/assets/compilers/sass.rb

smarthouseprojectdotorg
@smarthouseprojectdotorg
Hi What's a Hanami way of rendering one or another template from the action? After coding in PHP I get used to program 'edit' and 'update' kind of actions like this. 'edit' action is programmed normally, it loads data and renders the template (default behaviour). 'update' action validates params, if validation fails, it renders 'edit' template with all the previously entered valid and invalid data in the fields; if params are valid, 'update' saves data to the db and renders/redirect to the index/list template.
Also found this hanami/view#128 Has this been implemented?

Paweł Świątkowski
@katafrakt
@smarthouseprojectdotorg I wrote this a long time ago, but I believe it still should work http://katafrakt.me/2015/08/14/different-views-for-one-action-in-lotus/
tl;dr