Matt Painter
@nullpainter
Hey Mladen! Maybe not for 2.0, but I accidentally found a cloud-based logging framework a few weeks ago. Could be useful for crashes - but we're not expecting any, right? :wink:

Mladen Mihajlović
@mika76
hey @nullpainter
hah yeah for sure - not a bug in sight 😆
I've actually used https://www.loggly.com/ for an app once - pretty good although the app is a private app so it's not really used much

Mladen Mihajlović
@mika76
https://rollbar.com/ seems to be a good alternative too - also the free plan stores for 30 days while loggly only for 7
https://www.slant.co/options/955/alternatives/~loggly-alternatives

Matt Painter
@nullpainter
Nice! Was just looking for an excuse to play, to be fair. In other news, precious little on the Xamarin.Mac + screensaver front. I posted a question on Stackoverflow to see if it's even possible: https://stackoverflow.com/questions/52240799/creating-screensavers-in-xamarin-mac
(MS have a tool called Sharpie which automates the P/Invoke style process to, say, pull in ScreenSaverLibrary - but it's meant for people who have an advanced knowledge of Objective-C... hmm)

Mladen Mihajlović
@mika76
I was thinking the same and something else popped into my mind - there are some examples on github of how to use a webview to make a screensaver (eg https://github.com/chrstphrknwtn/word-clock-screensaver)
And then I remembered that there was a javascript port of Mame done for Archive.org (https://archive.org/search.php?query=mame%20roms)
so maybe one option could be to use those two together somehow
althouhg of course this is all theoretical - I have no idea what limitations there are in either mac os screensavers or the mame web emulator...

Mladen Mihajlović
@mika76
also https://docs.mamedev.org/initialsetup/compilingmame.html#emscripten-javascript-and-html
Also I'm not too sure how much of the code is really reusable - there's a lot of API tricks we used and the only one thing I can think of could be the romlist generation...

Hmm, interesting! That's a nicely left-field idea. I have no issues with learning Swift; would just be nice to actively rule out Xamarin. The community doesn't appear to be too large, sadly. There's a bit more than the romlist generation - recent refactoring of mine has made MameScreen platform agnostic (apart from the BackgroundForm references in the BlankScreen base class), HotKeyManager is platform agnostic, logging, Simple Container initialisation etc.

I was thinking that, IF we can reuse code, I'd just implement interfaces for Windows-specific things and just wire them to their platform-specific implementations via ContainerFactory.

Mladen Mihajlović
@mika76
nice - all finally sorted!
v3 is released!
builds are all building
installer is building
v3 milestone and project finished
hey it took less than a year :wink: 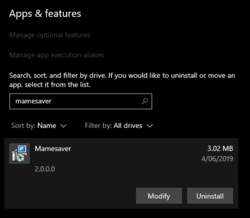 Mladen Mihajlović
@mika76
damn - I thought we changed those to 3 ages ago - didn't even check...
eh I don't think it matters
it's 3 cuz we say it is :laughing:

Matt Painter
@nullpainter
Ha! I'll post on the MAME forums again in a few days time. See if there are any more bites this time...

I posted this to /r/mame but it got automatically removed because I didn't have amazing Reddit karma. I emailed the maintainer to see if it could be approved and s/he just said "Nope". Must say I'm getting a bit disheartened with the MAME community. It just seems dead, and where it's not dead, nasty.

Matt Painter
@nullpainter
It's because /r/mame doesn't allow self-promotion. The maintainer was just being a douche about it so after a brief discussion where he was being remarkably patronising, I blocked him. Someone suggested a retro gaming network on reddit as "more suitable"
To the 32/64 bit thing - I think it's an issue in your build pipeline. The .scr/.exe built via msbuild works fine in c:\windows\system32
If you could look into that, I'll work on the old MAME support. Then we can maybe get a point release out and do the promotion again...

To the 32/64 bit thing - I think it's an issue in your build pipeline. The .scr/.exe built via msbuild works fine in c:\windows\system32

Oops, I was on an old branch. I can replicate locally.

Matt Painter
@nullpainter
Fixed it. Even though the build configuration was Any CPU, the 'prefer 32-bit' checkbox was ticked. Now mamesaver.scr works fine in c:\windows\system32

Matt Painter
@nullpainter
PR created for both. Let's get 3.0.1 out the door!

Mladen Mihajlović
@mika76
Sweet thanks - the 32 bit flag might have come from the fact that an installer has to be either 32bit or 64bit and you can't have both. And he was installing manually. I think it's fine if the installer is still 32bit - it just places the any cpu .scr file into the program files (x86) folder - but either way it will work now - thanks!

Matt Painter
@nullpainter
Hey, something! Just did a vanity search:
https://www.reddit.com/r/MAME/comments/chcp29/mamesaver_a_mame_screen_saver/
Had to create a second Reddit account. Wonder my new one will also be blocked.