Mainak Jas
@jasmainak
Earlier is better for me too

Alexandre Gramfort
@agramfort
@massich is with me
stefan are you on hangout?

Stefan Appelhoff
@sappelhoff
i have a google account and I am on the https://hangouts.google.com/ page
stefan.appelhoff@gmail.com
I don't have your Gmail address Alex

Alexandre Gramfort
@agramfort
I am calling you now
alexandre.gramfort@gmail.com
do you see my messages on hangout stefan? 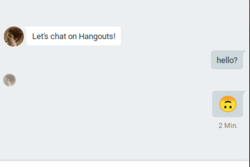 Alexandre Gramfort
@agramfort
can you send me a message?

Mainak Jas
@jasmainak
@sappelhoff let me know when to retweet your blog post about the gsoc? :) also I wonder what you thought of the experience and how it was different from work at the lab

let me know when to retweet your blog post about the gsoc?

the final report? or the general GSoC blog? :-)

Regarding the experience: It was very valuable to "only code" for three months ... first of all it taught me that it does not mean to code all the time ... I did LOTS of stuff besides "pure coding" ... browsing documentations, reading guides, discussing with reviewers, getting help from you guys, thinking HOW to code

that was nice and it was really gratifying when a given issue was finally solved and a PR merged :-)

At the same time the experience was also quite challenging because I realized that the work "never stops" --> along the lines "okay, the PR is merged ... but now we need to fix A, B, C". That was demotivating me sometimes, but as you also said sometime in the GSoC I could just take a day off and work on another day.

So in that way, GSoC was not so different from doing my PhD: Sometimes the work just flows and in one day you get done what you have been chewing on for the whole week before.

Overall I think that I have picked up several new concrete coding things and also more broad perspectives on programming, so this was really great for me.

What's also great is to see that many people benefit from the work. E.g., just right now Clemens Brunner is integrating pybv into MNE-LAB ... which is possible because I fixed it / brought up to date during the GSoC ... originally intended to build it into MNE-BIDS.

so summarizing: valuable, challenging, gratifying, and great to see the impact :-)

Mainak Jas
@jasmainak
haha yes, we are a bit intense. And you had to sometimes use beta software upstream and fix or report bugs, so hope it gave you some perspective of how the open source world works. I think you achieved quite a bit, I wouldn't be surprised if there were more than 50 PRs merged :)

Alexandre Gramfort
@agramfort
Yes it never ends. But it’s ok. The important thing is that you make progress and consolidate the field
I have worked on problems for 13 years :)
And I stop thinking that it will be solved this year

I think you achieved quite a bit, I wouldn't be surprised if there were more than 50 PRs merged :)

I should have kept a count!

And I stop thinking that it will be solved this year

Alex Rockhill
@alexrockhill
@sappelhoff We're working on mne-tools/mne-bids#237 for taking a EEG only fif file (for instance if you collected both MEG and EEG and only wanted to push to BIDS EEG) and converting it to bv, and @agramfort pointed out that montage and potentially other raw.info fields will be lost. Have you sorted this out already or I can write to a channels.tsv but do you know if I would be missing anything major?

Actually, looking at the existing code, I think the channels are written out already. By my test, existing files were: