Andre-John Mas
@ajmas
I was exploring the ability to autobind methods to a class instance, for specific scenarios and I am curious to get you feedback on this 'hack': https://gist.github.com/ajmas/74bc3ff48dcd0c645d3fd59f953e8b2c

Kyle Thomas
@its-kyle-yo
Hey everyone! Is there anyone available to help me out with taking over a chapter? I'm a bit lost and overall confused and need help with getting things in order to make changes and updates

shallahrichardson
@shallahrichardson
Hello, everyone, my terminal is saying that the operations for javascripting was rejected. Any ideas?
Also is there a way I can upload my screenshot so everyone can see what I'm talking about? 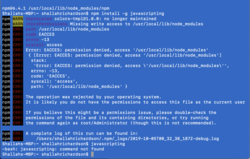 Andre-John Mas
@ajmas
@shallahrichardson Before I answer, from reading it what do you think could be the error?
The explanation is in the error message, so I want to see if you can decode it

Andre-John Mas
@ajmas
Please read each line. This is important if you want to be autonomous and a good problem solver in Node JS
What does line 4 say?

Andre-John Mas
@ajmas
followed by?
Does you user have write permission to the indicated path?

Andre-John Mas
@ajmas
Needing to get off the computer, so I'll provide the answer. Your user can't write to the indicated folder, as indicated by the error message. Further down it suggests running the command as admin, which is not ideal but the way nodejs installs global packages
for this: sudo npm install -g javascripting
For more on sudo: https://linuxacademy.com/blog/linux/linux-commands-for-beginners-sudo/

Andre-John Mas
@ajmas
Anything under /usr folder belongs to the root user, so you won't have write access. In order to get write access you need to run the command as root, which is what the sudo commands allows you to do

Andre-John Mas
@ajmas
The error message indicates your user is not able to write to that path
I'd recommend reading up on Unix command line environments. It is a big, and took me a while to learn everything I know, but it is worth it. Make the command line your home :)
This may help for file permissions: https://access.redhat.com/documentation/en-US/Red_Hat_Enterprise_Linux/4/html/Step_by_Step_Guide/s1-navigating-ownership.html
It is Linux oriented, but the Mac shares a lot of the points

HoneyehYz
@HoneyehYz
Hi, I am trying the https://github.com/workshopper/javascripting#run-the-workshop but once I enter javascripting I got these error messeges:
EEXIST: file already exists, mkdir '/home/vagrant/.config/workshopper'
EEXIST: file already exists, mkdir '/home/vagrant/.config/javascripting'
I keep deleting them and got the blue menu, but once I click on one of the options I again get these error messeges. I also once remove everything and started from begining. So I am sure I followed the steps but there must be somthing maybe with lighthouse lab Vagrant.
anyone had the same issue?

Mahsa Arabameri
@Mahsa1990a
Hi everyone.
When I am trying to run javascripting through my terminal I got error —>
EEXIST: file already exists, mkdir ‘/home/vagrant/.config/workshopper’
Does anyone know what is the solution?

kelzceana
@kelzceana
Has anyone got the solution to this error message
EEXIST: file already exists, mkdir ‘/home/vagrant/.config/workshopper’

Natasha
@NColusso
Very happy to share, went through so many different pages looking for answers and trying different options hoping to save others the time I spent sorting out :) glad it worked for you

Christopher Yourth
@Yourthy
I had 12.19.0 on my local and have installed the 12.19.0 on the VM but am now getting "-bash: npm: command not found" when trying to reinstall javascripting. Any ideas??

Misogishin
@Misogishin
gus i wrote javascripting but it tells me that nothing is found i tried to install everyting again but nothin changed what should i do ?

Samrath07
@Samrath07
I am having trouble in installing the functional-javascript-workshop using npm. Getting warnings and the package is not installed

the command to update node is 'nvm install node'

(since i updated node on both the host and VM, they both had the same version (the most up-to-date one); if you'd rather not update, you may need to make sure they're at least running the same version)

i then re-ran 'npm install -g javascripting' in terminal, and the installation looked differently this time. then when i ran 'javascripting' all my issues were gone.

if you get a message saying npm is not installed, then you may have to google how to install it

also, i had to have homebrew installed on both the host and VM (check the homebrew website for installation details). hope this helps!

Getting this error when trying to install javascripting, can anyone help out with a solution?