Steven Rosenberg
@passthejoe
The JavaScript ecosystem is very byzantine, for sure.

Steven Rosenberg
@passthejoe
This illustrates why I could probably host my microblog (which gets very little traffic) on Google cloud, but my main site uses too much bandwidth, and a traffic spike could lead to a nasty bill. Shared hosting is a much better fit for bloggers at all traffic levels.

It's not a big deal to show all 2000+ posts in an Ode site at once: http://updates.stevenrosenberg.net/?first_post=1&num_posts=all

john henry
@john_henry_twitter
Very cool Steven. I clicked it and now I feel like I have to read everything to justify the server load.

Rob Reed
@robreed_twitter
I love to see all of the experimentation. Thanks for reporting back. I appreciate it. What's clear to me from reading all of this is that you have to be pretty motivated and knowledgable to get an Ode site up and running today, as-is.

Steven Rosenberg
@passthejoe
Figuring out Hugo, Jekyll, Gatsby and 11ty (last two are the new hotness) are equally difficult but different.
Now that I did Ode on a (Google) VM with Apache, that is pretty set as far as instructions go. Amazon now has $3/month VMs to compete with Google Cloud and Digital Ocean. I need to try that. Hopefully the steps will be mostly similar.

Steven Rosenberg
@passthejoe
I'm also considering a move to NearlyFreeSpeech.net. I had an Ode site there years ago. The key is that for about $4 a month, it's pretty much unlimited bandwidth, and they CAN handle a spike without your site falling over. Plus, they manage the servers. With a VM, I can handle configuration and security, but I'd rather somebody do it for me. Plus NFS offers a lot of software that they install and maintain. If I can get Unison to work (I'll probably have to compile it on my laptop), that's the key.
The main problem with a free Google VM is that bandwidth is very tight. 1 GB/month. I could probably get away with paying for bandwidth, but a spike would prompt an unwelcome bill.

Steven Rosenberg
@passthejoe
NFS has a policy where they will pretty much never charge for excess bandwidth. If your site is super popular, you might have to pay $5 per month, but they are extremely accommodating when it comes to bandwidth. I think I'm paying $16/month with Hostgator for my Ode sites and a WP site. I could definitely cut that bill in half.

Rob Reed
@robreed_twitter
As you know, one of the big benefits I see with a platform like Ode, any self-hosted platform, is that you can host it anywhere. So they can work for anyone as long as there is a minimal local infrastructure to support hosting. The vision has always been a platform that you can run from an internal drive or even a plugin in external drive, run locally, or over a local network, or host widely (whether public limited by permissions). I really want some platform that seems like an extension of a static website. Correct me if I'm wrong, but I still think Ode has the inside track on that.

Steven Rosenberg
@passthejoe
There are always going to be technical challenges in setting up these systems. Smoothing the way through documentation is the way to counteract this. And maybe containers are an answer ...
There are MANY people advocating for retaining ownership and control of your own content, and Ode is my way of doing that. We just have to keep pushing for own- and roll-your-own.

There are always going to be technical challenges

I'd like to think there there are always going to be steps more than technical challenges.

I deactivated my Twitter account by the way. But you can find me here or by email if you need to.

I'm really trying to simplify the default theme. I don't care if it's fancy. I want it to work as a baseline without modification and then I want to make it as simple as possible to modify. Take primary navigation for a moment. It was more complicated but also more fragile. Now it's incredibly basic and a few additional rulesets and a little JS from now it will be better off for it. Want to include dozens of links? Go ahead.

There's a version running at ode.io now. I could be handling this testing much more elegantly of course. For example (as you may know) rather than having the new theme be the default, I could just rename it and then explicitly request the working theme as part of the URL. But I figure this is my prerogative for having an exceedingly unpopular project. :)

Ummm… The responsive styles are essentially broken at the moment because I've been renaming things. Currently only the "marquee" is intact. (That's the bit at the top that reads "A platform about you*"). If you'd like to see some of the additional styles I'm including for content (again, very basic) you I have a playground post here: https://ode.io/playground/testing-2_shy.html#testing-2_shy. (Shy posts are only visible when explicitly requested.)

What else… Oh it currently includes a very simple 12 column floated "grid". I want the floats, flexbox, and grid to all be options, without a lot of fuss. To do that I'm really trying to think in very basic terms.

Rob Reed
@robreed_twitter
Feel free to tell me what you'd like to see changed.

Steven Rosenberg
@passthejoe
One thing that might make it look better in terms of responsiveness is having a maximum width when it is showing on a regular PC so it's not so hard to read from left to right with too many words on one line.
This message was deleted

john henry
@john_henry_twitter
Rob, that looks pretty incredible. I’m on holiday for a few weeks, but if you need another set of eyes or hands for any features let me know.

Hard to read on a "big" screen because your eyes have a long way to travel from left to right.

I think the whole thing might have to float in the center because it looks a little funny with just a max-width: 800px on it.
You can get it in the middle with margin-left and margin-right set as auto

This is a crazy hacky solution. My CSS is trial/mostly error, so I'm sure there's a better way to do this). The original looks great on mobile and tablet; I'm just worried that the text is too wide for desktop and laptop reading.

Steven Rosenberg
@passthejoe
I can't find the right color, but changing background-color controls the color on the sides.
All of these suggestions are like "reverse" progressive enhancement -- so what looks good on mobile doesn't make it look worse on desktop. 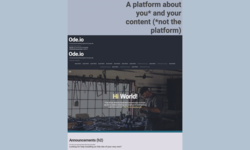