Sebastian Pfitzner
@pfitzseb
Hey again, is there some easy way to use/define auto-indentation in LT? I had a look at the python plugin and it seemed to be quite a lot of work. Are there plans of implementing this feature? Should I open an issue for it?

Mike J Innes
@MikeInnes
Funny you should mention that, I just implemented it – one-more-minute/Jewel@5e7e8d6
I'll push an update soon – in the mean time, if you want, you can just clone the repository to get the latest code

Sebastian Pfitzner
@pfitzseb
Hehe, pure conincidence... looking forward to trying it out, although I'm not sure how to clone it and make LT use it. I'll just wait for the update

Mike J Innes
@MikeInnes
Well, if you change your mind it's easy enough – just go to the directory listed here, delete the Jewel folder and clone the plugin in

Sebastian Pfitzner
@pfitzseb
nice, it's working :)
although there's one minor nitpick that may or may not be related to your code (could also be the codemirror part or something): The automatic indentation defaults to 2 spaces regardless of what behaviour is set in LT.

Mike J Innes
@MikeInnes
Yeah, it did seem like that was hard-coded in, not sure how to fix that at the moment though. Feel free to open an issue to remind me to look at this (and any other nitpicks you have :))

Eric West
@edubkendo
@one-more-minute can I ask what kind of stuff you are doing in julia, or interested in doing with it? I ask because I see the projects you've started and they resonate with some of my own wants. Lazy.jl for instance.

Somewhat oddly (given the focus of the language and the fact that I'm doing Physics) I haven't spent much time on the numerical side. Partly that's because there's plenty of people doing that already, and I think Julia has a lot of potential as a general purpose language as long as the libraries (like Lazy.jl) are there.

My main projects for the foreseeable future are Jewel and perhaps a Markdown parser (which is Jewel-related). So what kinds of things are you interested in using it for, then?

Eric West
@edubkendo
@one-more-minute I also want to see it fulfill its potential as a general purpose language. I actually think it could be a really amazing language for functional programming. At first I was a little disappointed when I dug in because that wasn't so well supported as far as the data structures and concurrency story went. But it was actually finding lazy.jl that made me realize the language itself is so expressive, the functional story I want can come from userland
especially with how easy it is to call into C

Mike J Innes
@MikeInnes
Definitely! Lazy.jl was one of my first experiments with the language and definitely a big factor in making me realise the language's potential – I'm glad it's having the same effect on others! Would I be way off in guessing that you're coming from Clojure? You'll probably be interested in FunctionalCollections.jl if you haven't seen it already.

Eric West
@edubkendo
So, actually I'm a Rubyist in my day job. Been interested in functional languages for a while, though, and clojure has been one that I've been very impressed by.

Mike J Innes
@MikeInnes
@edubkendo Cool – I guess Julia would be fairly appealing to a Rubyist, with the similar syntax and all? I used to use Clojure a lot myself but actually I've quite liked trying out a more imperative style.
@Varanas (and anyone else who's on master) – how do you feel about doing some beta testing? I've just pushed a new theme for Julia (June), if you pull the latest changes you can try it out

Sebastian Pfitzner
@pfitzseb
on it ;)

Sebastian Pfitzner
@pfitzseb
one thing that'd be quite nice (at least in my opinion) would be highlighting of function calls - which should be everything in front of (), right?
If you haven't had a look at it: The theme in Sublime Text (with the appropriate plugin) does this (and looks pretty good)

Mike J Innes
@MikeInnes
Hmm, interesting idea – I haven't used ST in a while but I'll definitely have a look

Mike J Innes
@MikeInnes
I like it, but it's one of those hard choices of what colour to use :) Any suggestions?
A darker blue, perhaps

Sebastian Pfitzner
@pfitzseb
yep, that and bold would be nice 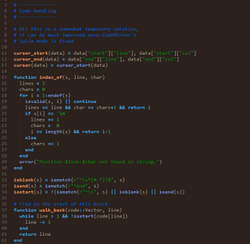 Mike J Innes
@MikeInnes
Yeah, I see what you mean – let's try bold out first then

Mike J Innes
@MikeInnes
How about that?

Sebastian Pfitzner
@pfitzseb
nice, I like it
would you mind if I tried to throw together a dark theme based on June?

Mike J Innes
@MikeInnes
Not at all! It'd be great to see what you come up with

Sebastian Pfitzner
@pfitzseb
Hm, the parsing of brackets/parenthesis seems to be broken - it's not possible to change anything about them by using span.cm-bracket. Since everything else does work it's no big deal (one can just set the default color and change every other color), but I thought I'd notify you.

Sebastian Pfitzner
@pfitzseb
that is possibly the reason why rainbow brackets aren't working, although I don't know enough of the plugin to make an educated guess... but it seems plausible

Sebastian Pfitzner
@pfitzseb
okay, but as I said: it's no big deal
but another thing: cm-keyworddoesn't style end, although there might be something strange going on with my LT installation since I was pretty sure that's new behaviour

Sebastian Pfitzner
@pfitzseb
ah, okay, that's perfectly justified if you want to have ends be less cluttering
still, I've got another question: Why are functions like print, printlnetc treated as builtin? I don't quite see why Types, special values like Inf and those functions should be treated the same.

Sebastian Pfitzner
@pfitzseb
aaand another one: what's the reasoning behind the distinction in https://github.com/one-more-minute/Jewel/blob/master/codemirror/julia.js , lines 232 to 236? It leads to strange styling if a function starts on a new line

Sebastian Pfitzner
@pfitzseb
and if anyone is interested: the first iteration of my dark version of June (not that there's much of a relation) is available at https://github.com/Varanas/Jewel

Mike J Innes
@MikeInnes
So, for the record, I inherited the Julia mode – most of what I've done so far has been tweaking it, but I'm going to do a complete rewrite to get rid of some of the weird stuff. I agree about print etc. – I'll think I'll treat all types as "builtin" (even though very little is really built in to Julia)
That column check is mine though, the idea is to treat both function foo() and foo() = as definitions
When I've got time I'll definitely give your theme a go!

Sebastian Pfitzner
@pfitzseb
Okay, a rewrite sounds like a good idea! Treating types asbuiltin even if they aren't really only comes down to naming.
About that column check: I totally forgot about that way to define functions! It does make sense to style them the same as the ones defined by function, although that check is not enough. Even a function call starting in column zero will trigger the definition-style, so a check whether there's an = after the function call should probably be added. That should cover all cases, but I'm not experienced enough in Julia to be sure about that.

Sebastian Pfitzner
@pfitzseb
And should you like June-dark and want it included in Jewel I'll gladly issue a PR.

Mike J Innes
@MikeInnes
The difficulty with doing a more robust check for something like foo(...) = ... is that you have to parse everything between the brackets before you get to the =, and even then it breaks when the = is on a new line. I might make it more precise in future but for now I think overshooting is probably better than undershooting