What I had in mind was something similar to the picture above. Whenever your cursor is above some variable (and/or some key is pressed), that variable and it's "first-order-children" (or whatever those might be called) are highlighted while the rest of the code is a bit dimmed. Otherwise it looks just like the version to the left.
That seems to be a compromise between rainbow vars and conventional highlighting - which of course doesn't have to be a good thing ;).

Could you give me an example of the kind of backtraces you're getting? That's exactly what I had tried to fix, on my system backtraces are very to-the-point. Are you sure you have the latest Jewel.jl code (the fix isn't in a released version yet)?

Sebastian Pfitzner
@pfitzseb
Ugh, stupid me... Works like a charm! No I finally don't have to debug in the REPL because I won't get proper backtraces in LT. Thanks!

Mike J Innes
@MikeInnes
Just so everyone knows – I'm going to change Jewel's URL to one-more-minute/Jewel-LT. gitter.im doesn't handle renames AFAIK so there won't be a redirect, but the URL of the chat room will change accordingly.

Ethan Sherbondy
@sherbondy
Loving the project so far. Is there a means for the inline evaluator to run relative to the path of the file being evaluated rather than the LightTable directory? e.g. run(pwd) yields /Applications/LightTable.app/Contents/Resources/app.nw. Is the expectation to launch a terminal client instead?

Mike J Innes
@MikeInnes
Sure, you can change the working directory at any time with cd – in your case you probably want to put cd(dirname(@__FILE__)) at the top of the file and evaluate it before anything else. You can also add a cd call to ~/juliarc.jl to have it run every time Julia is booted.
Oh, and thanks!

Mike J Innes
@MikeInnes
(also, just in case you don't know, include statements will always work relative to the path of the file they are called from whether you cd or not)

Mike J Innes
@MikeInnes
If anyone on master is using the #jewel module ... directives, they're no longer necessary – you should see the current module come up automatically in the status bar

Sebastian Pfitzner
@pfitzseb
Hey, I just had a look at this after some time - the changes and added functionality are very impressive! Just one minor nitpick: I think it'd be more consistent if any css changes were to be done by June and not by Jewel itself. Except for that fancy error background (.CodeMirror-linebackground.error) that isn't implemented anywhere else.

Mike J Innes
@MikeInnes
Thanks!
Unfortunately a couple of patches are currently necessary (at least until I get some PRs merged into LT) and it'll always be good to have some defaults for things like data frames. (Although I notice there's a font change there that really shouldn't be.) I'm going to do a lot more work on graphical output and CSS so I'll start making sure things are a bit more organised then.

Ismael Venegas Castelló
@Ismael-VC
Hello! I'm using Arch Linux and I just instaled julia from the repos, then Pkg.add("Jewel"), finally I install the Jupiter plugin in Light Table, but I get this error: http://bit.ly/UXFvG8
I mean I get that error when I try to evaluate some Julia code with ctrl+enter.

Mike J Innes
@MikeInnes
Look like gotos were only added to Julia recently, so the slightly older version you've got doesn't have them. I'd better fix that so it doesn't cause problems.

Sebastian Pfitzner
@pfitzseb
I ran into that problem too, but with the latest prerelease it works flawlessly. Not sure if you really need to do something about it...

Ismael Venegas Castelló
@Ismael-VC
ok I will compile julia insted of using the one provided by the Arch repos and test again then, thanks!

Mike J Innes
@MikeInnes
@Ismael-VC Great, let me know if you have any other issues!
@Varanas TBH it's a tiny fix, and it might be a few weeks before all the prebuilt copies of Julia are up to date, so it's probably worthwhile

Ismael Venegas Castelló
@Ismael-VC
@one-more-minute Sure I will certainly do so!

Sebastian Pfitzner
@pfitzseb
Oh, and those inline plots are pretty neat! Although I'm getting an AssertionError: path must be a string when using Gadfly (the plot is still displayed). Anyone else seeing that?

_
Mike J Innes
@MikeInnes
Try Pkg.clone("Gadfly")
I've got a patch for the JS but it's not out yet. If you get the master version you'll get interactivity

Mike J Innes
@MikeInnes
@Ismael-VC If you have problems doing the build then Pkg.update() should fix the Jewel problem for you

Mike J Innes
@MikeInnes
I have changed error messages a little but didn't intend to remove line wrapping. Would it be possible to send me a small snippet that causes this kind of long error message? Or perhaps a screenshot if I've misunderstood you? This should be fixable anyway.

Andre Pemmelaar
@Andy-P
I'm not at the machine that caused the error, but as I recall it was a @test macro used for unit testing. The problem was on a Windows 64 bit machine. I also use light table on a mac. I upgraded that as well, but am not experiencing the problem there. I will send the snippet tomorrow when I get to work.
Try @test 1 == 2 to see if that generates the problem

Mike J Innes
@MikeInnes
Ok, I think I see what you mean – if you evaluate `@test` with a long expression the header trails off the screen, right? (I'm on a mac too, but I can test on Windows though if that's not it). When I can I'll patch this anyway

Mike J Innes
@MikeInnes
Not sure about the first one but the second one looks to be from an outdated plugin – do you definitely see Jewel 0.6.3 in the plugin manager?

@one-more-minute I think you have already identified the error, but just in case, here is a screen shot of the problem I described earlier.

Mike J Innes
@MikeInnes
Great, thanks @Andy-P, I'll see what I can do

Andre Pemmelaar
@Andy-P
The problem is now on both my mac and windows after upgrading. Also,,The font for error msg seems to have changed.

Mike J Innes
@MikeInnes
Oh yes, there's a CSS definition in Jewel which shouldn't be there – I'll fix that too

Mike J Innes
@MikeInnes
Thanks! I'm glad to hear that you like it 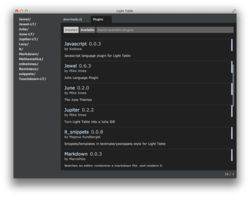 Mike J Innes
@MikeInnes
@Ismael-VC Sorry, I meant to say the plugin manager in LT. It should look something like this – note the Jewel plugin is listed, also at 0.6.3
Apologies if you've already done this, I'm just making extra sure because I'm pretty sure that's the issue (and if it's not I'm not sure what is)
If an update isn't listed try the "refresh plugin list" command