Shannon A. Fiume
@safiume
And I just updated the mainpage with a blurb on nanocarbons. ONC is all about hexagons!

Shannon A. Fiume
@safiume
So, I'm still head down on some climate science related info. After that I'll jump back to Metat1.

Shannon A. Fiume
@safiume
Based on the climate science info I've been reading. We need to clear up the disconnect between what lawmakers have were able to get global agreement on what's acceptable vs what needs to happen to actually end climate change. The IPCC reports are so huge and written for so many different audiences: policy makers, scientists, etc... that they are very, very time-consuming to read. The climate science has mostly been focused on shooting for targets that have been adopted, 2ºC, and 1.5ºC. which equates to the acceptable level of planet warming from some date, which I forget, 1750 I hope. Most of their models show how to get to 1.5ºC and various ways we can miss it. Where the disconnect is, is that 1.5ºC is only a portion less than 1/2 of all CO2 from anthropogenic emissions since 1750. Since we still have more than 1/2 we've caused to be emitted, it leaks back out from the oceans and land, to raise the temp higher than 1.5ºC for centuries. In order to stop climate change, or restore the planet back to a state before the pre-industrual revolution, just remove all CO2 that was caused by human emissions. That amount of carbon is 627 GtC today. The focus is therefore not how much carbon we think we can delude ourselves in to thinking we can still emit, but to fervently, relentlessly, aggressively pursue peak carbon emissions. Then at the same time bring on carbon negative technologies to solidify carbon or remove CO​2​​ such that we start getting to 25 GtC removal a year. I'm working on coming up with a nice way of showing what GtC equals 1.5ºC and 0ºC and the continued removal... The upside is the oceans should start to recover in a really rough estimate say around 2/3 the time it takes to hit 277PPM -> 13yrs, so maybe 8yrs?

Shannon A. Fiume
@safiume
@/all Still working on that article draft: https://docs.google.com/document/d/1ooV28JmLqGRSXnfSL5zOuwek-DIJnh3bR_Orb6z3_g0/edit
(then I'll jump back to meta1.)

Shannon A. Fiume
@safiume
@/all Ok, the draft is ready. Please comment https://goo.gl/F9HoVz

Shannon A. Fiume
@safiume
So I totally didn't expect this to be so high. For RCP 2.6, it leaves us with CO₂ concentration at just below 450 by 2100. Lots more work ahead 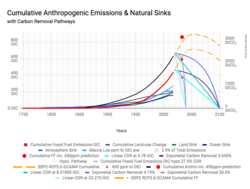 Shannon A. Fiume
@safiume
﻿﻿﻿﻿The dashed orange are two SSP2 RCP 2.6 GCAM4 scenarios. As I was unable to determine what the SSPs assume is cumulative carbon, either cumulative carbon from emissions only or cumulative carbon from emissions + land-use, I modeled both. Both show that RCP 2.6 exceeds the red hexagons signifying when we hit 450 ppm for their respective aggregations. What does this mean? RCP 2.6, overshoots 450 ppm, then returns Earth to just shy of 450 ppm by 2100. RCP 2.6 still leaves us with GtC of carbon in the atmosphere, enough to keep the total radiative forcing at just shy of 450ppm. That's a lot of carbon debt we should remove if we want to keep our glaciers. 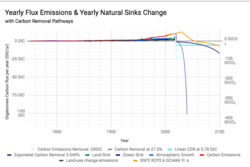 That's the yearly graph of SSP RCP 2.6 GCAM4 and my two proposed carbon removal, the existing emissions, and sinks. This is the yearly graph which doesn't show clearly how much we need to remove in order to get to a desired PPM level. The cumulative graphs more clearly show that as to reach a ppm level, is when the line ends, not a summation of area under a line or aggregate line curves.
I chose SSP RCP 2.6 GCAM4 as that's pathway contains the least amount of emissions. All other pathways are much, much larger.

The line in the lowest black, corresponds to SSP2 RCP 2.6 GCAM4

Shannon A. Fiume
@safiume
I have the sheets I used for the paper in google drive. https://drive.google.com/drive/u/0/folders/1LlqAwfGhQR72Q4O8qh1OW7owMroctGjz
The original RCPs are in iamc_db_co2_sorted.xlsx and lists that SSP2 RCP 2.6 GCAM4 is the pathway with the fewest emissions.

Shannon A. Fiume
@safiume
Ack. I completely forgot about the entirety of radiative forcing. So, RCP 2.6 equals CO₂-eq, and not directly CO₂. Under RCP 2.6, if radiative forcing percentages were what they were when the Earth last experienced rf 2.6, then actual CO₂ ppm should be 375 ppm. That brings the orange curves down to end adjusted to about 375 ppm. That's likely not enough to reverse the damage to the polar regions but it's likely just barely be enough to not cause total deglacation depending on how long elevated levels persist.

Shannon A. Fiume
@safiume
At the Maker Faire!!!! Please do drop by today.

Shannon A. Fiume
@safiume
Sorry, it's been a long few days...
Good! More later, say after The Conference on Negative CO2. 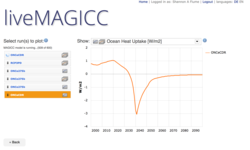 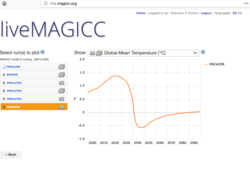 Shannon A. Fiume
@safiume
So, the latest MAGICC 6.801 runs look like this:https://docs.google.com/spreadsheets/d/1g8n_nRpOHsnK_7d73KsRmiZkRZND1ns4S0PxgEGZaKs/edit#gid=0
I'm still tracking down the error and uncertainty of the model for these numbers.

Shannon A. Fiume
@safiume
I bicycled to the meetup... I'm in the seahorse jersey.

Shannon A. Fiume
@safiume
It's been ages! What a year. I have my head in a prototype for Autofracture and with the latest SR1.5, everyone is talking about carbon again.
The next ONC meetup is this evening at either Hacker Dojo or a cafe in Palo Alto. I'm half tempted to do a cafe near the Palo Alto train station.

Shannon A. Fiume
@safiume
I've started the meetup at Peets in Santa Clara. I'm outside, and on a hangouts.
https://meet.google.com/cgp-nkgf-new

Tito Jankowski
@titojankowski
how was the meetup @safiume, any new ideas?

Shannon A. Fiume
@safiume
@titojankowski It was very lightly attended. Met a new member Scott and refereed him to the CARBON RUSH -- The Next Mega-Trillion Frontier meetup and http://manylabs.org. He's reviewing the current entrepreneurial carbon projects to decide how to contribute.

Shannon A. Fiume
@safiume
https://docs.google.com/spreadsheets/d/1Y7CcI4ykhJOYWqAJrvR04elrDbBKe9CFXuSjns1nCJA/edit#gid=0 We need to get CDR to scale to make this happen.

Shannon A. Fiume
@safiume
The meetup is happening at Peets!

Shannon A. Fiume
@safiume
@/all I created a jupyter notebook of the CDR Experiments for Susan's and my upcoming paper. The notebook and magicc input files for the new paper are on github: https://github.com/hsbay/cdrmex.
I do need volunteers for the Maker Faire! 5/17-19! And especially when I'm talking on CDR on the 18th. dm me.

Shannon A. Fiume
@safiume
I should get me some Azolla! We've got a tough precedent to beat.

Shannon A. Fiume
@safiume
Meetup today! It's a virtual one. Dm for the conference call link.