@/all I was thinking to schedule a Hangouts for the final discussion before the formal RFC at February 13rd or 27th . What do you think?

Also, @heiglandreas, did you contact Rasmus, Derick and Marcos?

Andreas Heigl
@heiglandreas
Not yet. Need to do that on sunday!

I'll invite everyone for the call later this week. Also, I'll putt the link for this Lobby in the event, so we can chat until there. 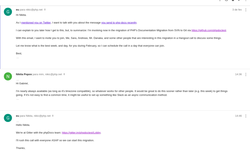 Ghost
@ghost~5a799b6cd73408ce4f8bea50
I'm a little busy in my job now, ASA leave it, I'll create the event inviting everyone for the call. Looking forward for this to happen :blush:

Ghost
@ghost~5a799b6cd73408ce4f8bea50
@heiglandreas Can you please join us tonight? I'll probably get late due to the train, it's heavily raining here , so you could start

Ghost
@ghost~5a799b6cd73408ce4f8bea50
Danack will like that, there's actually a guide to build that masterpiece

Nikita Popov
@nikic
It looks like someone actually did some kind of git migration there...
It's very old, but maybe useful

Ghost
@ghost~5a799b6cd73408ce4f8bea50
Including the karma system and everything, interesting

This is the misspell fixer I talk about, but I'm going to search for some build on top of CIs

Ghost
@ghost~5a799b6cd73408ce4f8bea50
@salathe Hello. Thanks for accepting our invitation. Your opinion in this migration will be very important :blush:

Danack
@Danack
So, a little progress report on tooling. It took me a bit longer than I thought it would to re-understand how the manual gets built and in particular how partial manual builds get built.
This repo https://github.com/danack/PHPDocTool will do all the stuff necessary to check out the docs, and PHD then render it locally, and watch for any changes on the file system, at which point it will rebuild just the changes.
The good news is rebuilding just the changes in isolation is really quick (a few seconds) the less good news is that because the build is done in isolation, there is some stuff missing e.g. if you make a change in Imagick::adaptiveBlurImage, that page will be updated.......but it will lose all links to other Imagick methods, because the class index was included in the partial render.
btw, that tool currently uses git ls-files -m to find the modified files. This apparently makes Docker very angry, and shouldn't be left running indefinitely.

Danack
@Danack
@salathe Do the repos for the doc-base and the PHD renderer have tests setup for them? Obviously using the same code that is actually run to build the manual as for CI and local tools would be good, but I think I'd like to make some changes to configure.php in doc-base, and possibly the PHD renderer to make it possible to i) call them as functions rather than having to invoke them through the command line ii) be able to compile small chunks of the manual, in a way that produces an output that is more like the full manual build rather than the current partial rendering, due to the indexes being lost.
If they have tests, then making changes would be reasonably safe.....if not, then no.

Danack
@Danack
I'm going to play with the github notifications next and look at rendering pull requests.....I'm going to stick with a separate tool rather than just using Travis for now, as I still think having the build results be almost instantaneous and viewable online will be better than Travis which can lag and would need to have the results pushed somewhere else to be viewed.
But ....it is possible that I might change my mind and just shove it in favour of Travis.

Ghost
@ghost~5a799b6cd73408ce4f8bea50
Awesome @Danack, I'll be taking a look into that later
I've been played with the misspell-fixers and Travis

Ghost
@ghost~5a799b6cd73408ce4f8bea50
@Danack @nikic @heiglandreas I won’t be able to join you guys tonight. I’m downtown, is heavily raining and I won’t make to home at time 😕

Andreas Heigl
@heiglandreas
Same here sadly. I have a sudden visit of. my parents and can't make it...
And I didn't get round to testing anything sadly as well. 😔

Danack
@Danack
Well in that case, I'm going to play with my new vaporizer.

FYI What I was going to say tonight was that:

i) making sure the configure.php in the doc-base repo and the phd render have tests would be a good thing to have done eventually. Currently that code can only be used via the command line, which is slightly annoying, but also the partial render can only render one file at a time, which is quite annoying. Changing that to be better would be not too difficult to do, but obviously would be better once someone has checked that there are enough tests in place to make sure rendering the manual doesn't break.

ii) I'm going to crack on improving https://github.com/danack/PHPDocTool to make it have a front-end that shows what it's doing (and what was recently rendered), to have a place where you can drop in the url of a github fork of the docs and have it render that before a PR is opened, and anything else sensible I can think of.

Nikita Popov
@nikic
Ooops, missed the time...
But looks like I didn't really miss anything :D

Have you seen this? :joy:

Btw, I'm a little bit absence due to some stuff from work, but, next week, I pretend to re-schedule our Hangouts, so we can align in what step we're in this migration.

Andreas Heigl
@heiglandreas
@carusogabriel Do you want to answer to the mail from Derick about abandoning the Mirrors? Or does not affect us at all? In the end the deployment-process will still be the same....

Ahh, just saw it in the internals@.

I don't think that this will affect us.

@nikic Aren't we using the git.php.net domain for this migration?