Word can refer to any context at any point in run-time.

Vladimir Vasilyev
@9214
For Pete's sake...
@nedzadarek do you understand how words/context mechanic works?

Vladimir Vasilyev
@9214
@nedzadarek do you understand how variables work, as in other mainstream languages?

nedzadarek
@nedzadarek
Similar I guess... but I cannot say with 100% certainty because I don't understand a lot languages that deep.

Vladimir Vasilyev
@9214
So you don't know/understand the difference, but you keep arguing that words are variables, as in other PLs?

nedzadarek
@nedzadarek
There are a lot of languages that uses "variable". Every language differs. Variable = value that can change over time.

Vladimir Vasilyev
@9214
@nedzadarek but variable itself is not a value, right?
Words is a value that can indirectly refer to other values. Variable is just a pairing between identifier and memory location.
Word can refer to (be bound to) different contexts, but context is not a value (in "variable" sense) itself, and not a memory location where this value resides.

nedzadarek
@nedzadarek
Similar stuff you can do in Ruby (you don't do this very often but... you can). @secret is still a variable (taken from: http://ruby-doc.org/core-2.4.0/Binding.html ): 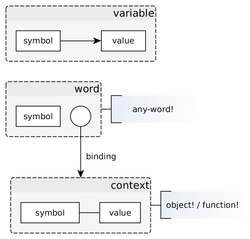 Vladimir Vasilyev
@9214
It's a bit different under the hood (there're nodes, symbol table and symbol IDs, value slots, etc), but the idea is the same.

@nedzadarek since "variable is a way to reference a value", "variable" (in your interpretation) can be either:

Word is not a variable in any of these cases, it never refers to the value directly, it's always refers to a context provided by some value (either by object on the heap or by function on the call stack).

Whichever terminology you personally use is completely up to you, but if you're willing to communicate with other Reducers in established (and productive) manner, while avoiding possible confusion of newcomers -- stick to our conventions and wordings.

Christopher Ross-Gill
@rgchris
@9214 Or just put caution tape on every script until a native version of USE appears.

did rebol have a bigger problem leaking context?

Currently Rebol 2 and Red are little different in this regard.

An interesting way of looking at it. I've long found it a very tidy way of creating micro-contexts. With Rebol 3's tighter control on context, I've found it a useful way of tracking word use—even within modules.

hiiamboris
@hiiamboris
is it ok that replace treats it's pattern as a parse rule only when /deep refinement is provided?
it's doc-string seemingly totally omits this specific

hiiamboris
@hiiamboris
yes, that's what I did to get to the conclusion

maybe there was an intent to make this work, maybe not, but just sayin... it doesn't work

lepinekong
@lepinekong_twitter
I have a weird case for set: it works with one element but not with 2 : * Script Error: forall does not allow word! for its 'word argument

Vladimir Vasilyev
@9214
@lepinekong_twitter both list* words are bound to other words (P1 and P2, respectively).
I guess that's what you want instead:

Vladimir Vasilyev
@9214
@lepinekong_twitter there's zero "bind stuff" here.
Examine the result of compose application and you'll probably figure out that it's not what you expected.
You should have used compose/only instead, which composes nested blocks "as-is" (though compose is superfluous here, as reduce can do the same job just fine). Moreover, I don't get why you need multiple parenthesis nestings.

lepinekong
@lepinekong_twitter
@9214 thanks I never know when to use reduce or compose, will have to think about it

Vladimir Vasilyev
@9214
@lepinekong_twitter use reduce whenever you need a block of evaluated expressions, and compose when you have a "template" data with forms to fill in.

lepinekong
@lepinekong_twitter
@9214 It is now part of my ever growing list of all troubleshootings :smile: https://i.snag.gy/obuyZO.jpg

Vladimir Vasilyev
@9214
@lepinekong_twitter don't push yourself too hard :) is that a list of "flashcards"?

One of the great and terrible things about Redbol langs is their chameleon ability. @nedzadarek, a great many details are hidden under a facade that makes Red quickly accessible to people, but there is the risk that they will see it "as just like X", when it really isn't.

That has been just my problem. The original REBOL core manual did not a good job on letting me forget about variables, pointer and classic OOP.

Now I read this section with great interest. I need just only to find how to bookmark discussions.

@nedzadarek what you seem to call a "variable" is a binding + relation between symbol ID and value inside context.

What is SYMBOL ID ? I am getting confused. Could you make a graph adding real words, blocks and arrows to this structure and also underliyng C like rappresentation of the data structure ?

Word reference its context through a node (just a special intermediate structure) and has a symbol ID, which is an index in a symbol table. Context, in turn, is just a two-column table: first column is for symbol! slots, second one is for any-value! slots.

When a word is evaluated, a value is fetched in the context pointed by that word, from the value slot that correspond to the symbol ID held by the word. In that sense, words is an instance of an internal symbol! datatype: word = a context reference + a symbol ID.

Symbol table, as I understand it, is nothing more than block of symbol! cells, one per Red session currently (should be one per module in the future). Symbol ID is an index of a cell in that block. symbol! cell holds a UTF-8 representation of a word (its "spelling", it's actually a pointer to a string buffer, again through node) and an alias field. If word is an alias of the other word (think case-insensitivity), this field will hold an index of the original word.