Vladimir Vasilyev
@9214
Your two aa's are idential because they have the same spelling and are bound to the same context.

Yes @moliad but first/second/third or obj/1 ../2 /3 is a method you could apply to object content. In fact in rebol you could use it on the third element of an object. (i.e.: probe first third obj)

The key distinction here is intended use. Maps and objects are based on unorderd key-value slots, blocks are based on ordered slots. This is an important distinction. While this is not laid out in a design spec, it tells you that it is safe to use blocks based on their order, but that it's not safe to do so with maps and objects. That is, a block will always return values in the same order, but a different implementation of map/object might change the internal order of things, and return them in a different order in response to words-of/values-of.

On foreach, as @nedzadarek showed, it is special, along with remove-each and repeat, If you use function rather than func. _function/collect-words and _function/collect-deep are responsible for that special handling.

This is a workaround for now, but a fairly effective one in most cases. Not perfect, but better than nothing.

_function is the context name in the function! datatype code.

Max
@moliad
@greggirwin not sure I follow you. foreach currently doesn't "localize" words in Red
or does it on set-word! within?

GiuseppeChillemi
@GiuseppeChillemi
@9214 while coding I had the needing to reuse object method arguments without rewriting them for each method. The final version of this 'crude object' Will be a function with many methods that share a couple of arguments sets.

Max
@moliad
(I just tested, and foreach does no localization of any word.)
the fact that its within another context (within a function or an object), isn't a property of foreach

Gregg Irwin
@greggirwin
@nedzadarek, set works the way it does by design. It allows you to externalize a word without having to use /extern, so it will not change. And you really don't want to mod things in the bowels of the langauge, even if you can, because that will create all sorts of problems when sharing code and staying compatible with language changes.

What about set (or other "functions") in the parse (f: function [] [parse [a] [set z word!] z] z; a)? It wasn't my intention to externalize a word by using set here.
Could you change that kind of functions (or introduce others) in the parse to be "local"?

Vladimir Vasilyev
@9214
If it wasn't your intention, then word should have been bound to another context in the first place.

nedzadarek
@nedzadarek
@9214 I want to create some words in the parse. That's my intention.
It modifies global context (in the mentioned case) but have I specifically chosen that function so it behaves this way? No. I don't have a choice - there is no another function to choice from.

No idea what "create some words" means. Parse doesn't create them in any way, make, to and load do.

but have I specifically chosen that function so it behaves this way? Yes.

Fixed it for you. There's plenty of functionality to make it work the way you want, but you seem to ignore all of it so as to strengthen your argument.

set and copy can support paths the way Rebol does, but that will cause a slight decline in perfomance. red/red#3528

@nedzadarek I'm not clear on the goal or problem, but maybe @9214's example cleared it up.

I want to create some words in the parse.

This is the part I don't understand. 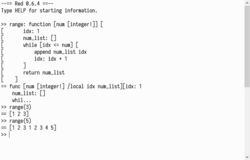 It works! I believe I need to learn more about copy and Red's "word"

Boleslav Březovský
@rebolek
@pimgeek good idea :) If you have any questions, feel free to ask. Just a note, in Red, functions do not use (...) for arguments. It works in your case, because your function has just one argument and parenthesis evaluate all values and return last. So (3) in your case becomes 3. But if you'll have function with more than one arg, it won't work.

pimgeek
@pimgeek
oh, my god ... I mistyped it and didn't notice 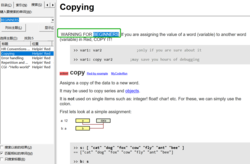 I have checked the manual and found the following BEGGINER MUST KNOW, thanks for your kind help, I will finish all of BEGGINER's reading.

pimgeek
@pimgeek
BTW, is there anything in Red like (let ... ) in the Lisp language?
I mean, data "processing" without side effects?

Boleslav Březovský
@rebolek
In Red, words have their value based on context in which they are defined, so it possible to do something like let, but differently.
@bitbegin or you can use collect and get rid of local block:

When you use parse you can set words to some value, for example in parse [a] [set w word!], parse creates word w.

Fixed it for you.

No. You are wrong.

There's plenty of functionality to make it work the way you want, but you seem to ignore all of it so as to strengthen your argument.

Why do you think I'm using function by default? It's the closest to a "I don't care, just don't mess global space - make everything local" attitude. I'm not ignoring anything - it's just they are less suited to more complex code. Let's dissect your examples.

You have only one local word z. What if you have 10 or 20 words that have more than 4 characters in it? For example:

You are making code longer (harder to understand, even it's by "a little).

You find this in someone's code. What's the purpose of the bind here? You have to go to the context to see whenever or not someone are changing some core functionality of the parse. It makes code less readable.

Yes, it's that easy.

If you are going to say I have choice because the language is (is it?) turing complete then you should check what is the Turring tarpit. Is it the turring tarpit? I guess no... but It starts to depart from the Rebol's motto "Rebol against complexity". Especially your binding code.