Nate Wang
@supnate
Hi @Prattjames , yes for now. Just published rekit-core 2.2.2 to support that. Create a 'templates' folder under your project's 'tools' folder. Then create template files with names like: https://github.com/supnate/rekit/tree/master/packages/rekit-core/templates Rekit will use the templates in your project first.

Fahim Shariar Shoumik
@sh0umik
I brought this topic up to my Senior React Dev for using Rekit since our existing React app got messy , large and unmaintainable. We decided to go with feature wise folder structure and loosely coupled components. Rekit bought our attention but the senior Guy is not confident enough for using rekit for our company, however I am using it for personal projects, loving it , he is worried about the long term support and contributors. Anything to mention about this @supnate

Nate Wang
@supnate
Thanks @sh0umik for raising the question here. I totally understand the concern. My answer is don't need to worry about it at all because you are not depending on any frameworks or libraries. Rekit Studio is mainly a tool for you to generate, refactor and visualize code, it doesn't wrap any API of React or Redux. You can stop using Rekit and switch to write all code manually at any time, with your favorite code editors. Just as I mentioned in the article, you use Rekit but not depend on it. To use Rekit Studio, the only thing you need to follow is how Rekit organize code by features and how to write actions and reducers. But that's not special practice used only by Rekit but widely accepted practice which is helpful to build large and scalable applications (though we summarized the practice individually but then found others do similar things). That is, the conclusion is, even if we stop Rekit (though we definitely believe we won't), your project could continue.

Fahim Shariar Shoumik
@sh0umik
@supnate that's a relief . Good to know . Our team is also worried about Server Side Rendering . Can you point a doc or write in medium about SSR with Rekit or Include it as feature for future . It would have been great.

Nate Wang
@supnate
Yeah, SSR is in our backlog. We will support it in future. I believe there have been many articles about it and you can just implement them in the current Rekit project. Rekit doesn't prevent from doing that.

Fahim Shariar Shoumik
@sh0umik
Great :) . I will try the SSR and post update here . I am playing with SSR with Golang and Rekit. Stuck at Browserhistory in Route . Since SSR doesn't depend on BrowserHistory so I have added MemoryHistory in routing and now getting a null pointer execption. rekit compiles will with Goja. :)
my updates are here https://github.com/sh0umik/golang-rekit-ssr
I am positive that if i try with node.js it will work fine

Nate Wang
@supnate
It looks great, thanks for the sharing. Looking forward to your findings about how to config SSR for a Rekit project.

@zoosammen
@z00dev
hi @supnate . Im trying to sort up some mess here from when i left rekit in someone elses hands. we are on 2.02 still. There has been some custom code to handle the v4/v5 router migration, i see you have a function to handle V3 and then use it for v4. Which i would rather use. Also i have some questions about the reducers and where to properly implement e.g react-redux-firebase library, would the reducer and initalization go into the rootReducer eg: https://pastebin.com/qvJhL4Hq and lastly how would i best upgrade into 2.2, just follow the commits?

Fahim Shariar Shoumik
@sh0umik
@supnate i have found an issue in the boilerplate
it lacks the meta property <meta name="viewport" content="width=device-width, initial-scale=1"> thats why the rekit app is not responsive in mobile devices and in chrome browser. works fine on firefox though . however i have given a pull request to boilerplate branch, describing the issue ..

J. Pratt-Delzenne
@Prattjames
hi @supnate do you know codesandbox ? https://github.com/CompuIves/codesandbox-client, maybe there's somethings they do that can help rekit. Their editor looks good I think they use monaco too.

Nate Wang
@supnate
Yes @Prattjames , there's really much to learn from codesandbox about how to integrate jsx, eslint to monaco editor.

Harry
@harlyon_twitter
We just recently switched to rekit for building interfaces in React.. Its been cool so far. The only thing now is our devs are finding it add to call APIs with it

Nate Wang
@supnate
Hey @harlyon_twitter , glad to know that! Remember to always upgrade to the latest rekit-core and rekit-studio.
What do you mean by " finding it add to call APIs with it"

Harry
@harlyon_twitter
Using it with APIs for fetch data

Nate Wang
@supnate
Sure. Rekit generates the template that uses redux-thunk (https://github.com/gaearon/redux-thunk) for API call.
When you create a new Rekit app, there's a sample inside about how to fetch a JSON data from reddit.
You can also look at https://www.youtube.com/watch?v=i53XffYtWMc&t=7s to see it step by step.

Harry
@harlyon_twitter
is it as simple as it is in the video?

Nate Wang
@supnate
It should be.

Harry
@harlyon_twitter
Kool,,, we will try it out

Cello Spring
@cellerich
Hi Nate. I'm very new to React, Redux, Thunk, Sagas. However I managed to start with ReKit and made a new page where I can fetch data from a local API (done with loopback). Fetching was done with Axios and Thunk. Now I wanted to try the way with Redux-Saga and installed "rekit-plugin-redux-saga", created a new "Feature" afterwards and initialized all the things needed for Saga. After doing that I found out that index.js was not updated with the necessary "Saga-Middleware" stuff.
Therefore 2 questions:

Cello Spring
@cellerich
Thanks for the answer @supnate, but I have no luck. I tried the following steps with a new rekit project:

If I look at the source files there is also no "rootSaga.js" and no Saga Middleware injected in roor - index.js 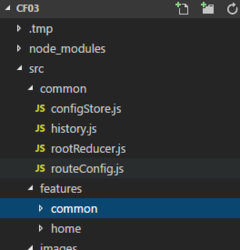 Seems like the "code--edit-injection" from the plugin is not called during install.
I tried on my Windows machine and as well on a Linux-Mint computer - same results.
Any hints?

Farina Ashfaq
@Farina16
Any one know react-router authentication in rekit???

Nate Wang
@supnate
@Farina16 You may describe the problem you met when creating authentication with Rekit. I've not used that before but Rekit should not add magic to common implementation.

Farina Ashfaq
@Farina16
Routing Authentication the user cant access inner webpages without login how to authenticate the page in rekit
and another . thing i want an example how to form submit in rekit

J. Pratt-Delzenne
@Prattjames
@Farina16 It's not related to Rekit, it's related to how you authenticate in a React App in general and how to manage your Authorization(Authentication: https://medium.com/@rajaraodv/securing-react-redux-apps-with-jwt-tokens-fcfe81356ea0, Authorization: https://hackernoon.com/role-based-authorization-in-react-c70bb7641db4). There's no standard way of doing it.