matrixbot
@matrixbot
hannes and is it possible to visually "link" the axes of the plot at the bottom of http://toyplot.readthedocs.io/en/stable/matrix-visualization.html ? so that you could have eg histograms of the bars or columns
hannes BTW there is a bug: if i click into the matrix in that last plot, the mouse coordinates are shown in the distribution plot with its coordinates!

Timothy M. Shead
@tshead
A matrix visualization is a special-case of a table, so you can do anything with it that a table can do, see http://toyplot.readthedocs.io/en/stable/table-coordinates.html
Getting multiple plots on one canvas to line-up is tricky-but-doable. We are actively looking at how to make it easier.

matrixbot
@matrixbot
hannes hm, i cannot figure out how to go from table to its data values to use them as cell labels

Timothy M. Shead
@tshead
I created an example, take a look at https://github.com/sandialabs/toyplot/blob/master/sandbox/matrix-plus-labels.ipynb

matrixbot
@matrixbot
hannes ah nice, thank you very much
hannes i was thinking i would need to use table.body.cell.data thingies :)

Alan Brooks
@lannybroo
I love toyplot. The emphasis on reproducibility and minimal chart junk resonate. Any plans to add plots from the statistical family such as box plots or violin plots?

Alan Brooks
@lannybroo
Also, when I click the axes, the displayed value is wherever I clicked. This did not match my expectation which was that the displayed value would be the closest actual data point. What is the intent? I looked in the bug list and didn't find this reported (unless sandialabs/toyplot#147 is related).

Timothy M. Shead
@tshead2
@lannybroo - thanks for the kind words. In the absence of box plots or violin plots you might consider using axes.fill to display percentiles, like the example in http://toyplot.readthedocs.io/en/stable/labels-and-legends.html#canvas-legends
Agreed that the intent for interaction is to go beyond simply showing pointer coordinates - #147 is an example, along with #75, and the spatial branch, which I need to get back to.

Timothy M. Shead
@tshead2
Oh, and depending on how much data you have, take a look at https://github.com/sandialabs/toyplot/blob/master/sandbox/violin-plot-alternative.ipynb … doesn’t work in all cases of course, but there’s intellectual honesty in showing all your data.

Deren Eaton
@dereneaton
Hi @tshead2, I'm playing around on toyplot-0.15.0dev, and it seems that the add_mark() function of cartesian axes has been removed. Is that right? This is for some code I adapted from here: https://github.com/sandialabs/toyplot/blob/master/sandbox/custom-marks.ipynb

Deren Eaton
@dereneaton
Ah, sorry, I was not on the version I thought I was on.

Timothy M. Shead
@tshead
Happens to me all the time 😬

Taimur Abdaal
@refrigerator
hey folks, toyplot looks awesome :) any idea when it might get to 1.0?
and how risky it would be to start using it now (albeit on a small team, so we can probably handle breaking changes)

Timothy M. Shead
@tshead2
@refrigerator - Thanks for your interest! I rate the risk as “very low”, though I admit I have a hard time committing to a 1.0 release. API changes are rare, and the old API is always explicitly deprecated in one release before being removed in the following release. Releases happen roughly two-to-four times a year, so the pace of change is pretty low. If you stay up-to-date and make sure you have the Python logging module configured to show warnings. you’ll never be caught by surprise.

Timothy M. Shead
@tshead
Toyplot 0.16.0 Released - this is a bit of an emergency release, triggered by an API change in networkx, which is a dependency of colormath, which we were using for colorspace conversion. I eliminated the need for colormath, which greatly reduces our dependency footprint and makes me happy. On the feature side, you can now specify per-scatterplot-datum, per-axes, and and per-canvas hyperlinks, which can be handy if you’re embedding Toyplot figures in a web page. Note that this is in addition to the existing support for hyperlinks in text, which could be applied to labels, tick labels, legends, annotations, etc. There has been a lot of work done on the docstrings / API documentation, with more to come since this release was earlier than planned. Finally, thanks go to @dereneaton for helping fix a problem with text layout and @kannes for fixing a broken link in the documentation. As usual, details are at http://toyplot.readthedocs.io/en/stable/release-notes.html … enjoy!

hannes hey, trying to plot 12742 x,y points in toyplot i get this in my jupyter notebook:

IOPub data rate exceeded.
The notebook server will temporarily stop sending output
to the client in order to avoid crashing it.
To change this limit, set the config variable
--NotebookApp.iopub_data_rate_limit.

hannes expected or a bug?
_
hannes oh, i guess the svg created is too huge
hannes yeah, with toyplot.png.render(canvas, "figure1.png") it worked, slow but no error
hannes can i inline such png without much hassle? i would not want to write and read a tempfile by myself, this is just a tiny toy side dabbling
hannes awesome convenience api :))

Timothy M. Shead
@tshead
@hannes - this is expected behavior for Jupyter. If you use toyplot.png.render(canvas) without a filename / file-like object, it returns the png data directly, so you can skip the round-trip to disk. See http://toyplot.readthedocs.io/en/stable/rendering.html for details.
In a notebook, you can force PNG output instead of HTML output in a variety of ways. I think the clearest is to do

If you are generating lots of figures in a notebook and want to force them all to be rendered as PNG, do the following:

… and then every canvas will be automatically rendered as an inline PNG.

matrixbot
@matrixbot
hannes GSS79 (Gitter): you mean in labels etc? why not unicode :)

rahulroxx
@rahulroxx
Hey, I am new here can I work as substitute to matplotlib animation functions?

Deren Eaton
@dereneaton
Hi @tshead , is it possible to modify the global defaults for toyplot, such as the default canvas height and width so that a user could set this just once at the top of a notebook?

Timothy M. Shead
@tshead
Those defaults currently live in toyplot.canvas.Canvas.init() … but they could be moved to toyplot.config instead. So in the short-term, your best bet would be to setup width and height variables at the top of your notebook and pass them to the API whever you’re creating plots.

Timothy M. Shead
@tshead
@dereneaton - I just pushed an update to allow canvas width and height to be set in toyplot.config. I’ll put together a formal release in the next couple of days … it’s been awhile.

Eaton Lab
@eaton-lab
@tshead , is it possible to create a colormap for matrix plotting that scales from a solid to transparent for a color? The goal is overlay several matrices and show the intensities of values in each layer as a different color. But I can't seem to figure out how to get transparencies in matrices currently.

Timothy M. Shead
@tshead
Yep, I put an example up at https://github.com/sandialabs/toyplot/blob/master/sandbox/crazy-colormap-tricks.ipynb
Annoyingly, due to a quirk in the way toyplot.canvas.Canvas.matrix is implemented, you have to specify domain_min and domain_maxexplicitly when you create your colormap(s). That shouldn’t strictly be necessary in all cases, so I may update the implementation to make it more forgiving (and provide useful warnings).

Timothy M. Shead
@tshead
FWIW, overlaying visualizations like this isn’t really “The Toyplot Way”, since you have interactive features (tooltips, etc) that likely won’t behave properly. I guess what you really want is some kind of multi-dimensional color map that’s a generalization of the current scalar color maps, so you could create one matrix, but supply data that’s M x N x (number of features).

Eaton Lab
@eaton-lab
Thanks, yeah the layered plot didn't end up looking that great, but having several matrix plots side by side turned out to look really good. Thanks!

Eaton Lab
@eaton-lab
@tshead, is there an easy way to define certain marks to fit on the canvas (affect the domain) but not be included in tick marks? An example is that in toytree I use a single cartesian axes to draw the the graph and add text tip labels. When I add a scale bar (axes) I would like it to show only for the tree and not the text labels. Splitting it into two separate axes does not seem like an ideal solution. And I've tried setting the domain but then the text labels get cut off. I've started writing a custom mark object (which I hope to finish eventually) but even there I'm not sure exactly how to do this. Any tips? The following is an example: 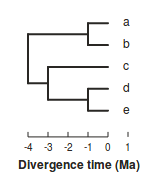