Ricardo
@ricardoromaobr
WebForms has something like it. If I remember :)

Mladen Macanović
@stsrki
@ricardoromaobr I think it should already be possible to do. I will try to see what can be done and will let you know

Ricardo
@ricardoromaobr
@stsrki There is something new for me about DataGri for page data from database?

Mladen Macanović
@stsrki
@ricardoromaobr So I looked into DataGrid and there is going to be some changes to make it work. Basically once I fix this issues you could use a IQueryable to connect with the database as a data-source. When I first created DataGrid there was some issues with mono runtime so I had to have some workarounds that are now stopping us from using large data-source. Since I'm already behind the schedule with v0.8.7 I will probably move this to the next v0.8.8. Hope you will understand.

Ricardo
@ricardoromaobr
@stsrki In general people use a DDD that use a pattern like Repository. So this object will make the pagging and DataGrid need to be skill to get the number of lines of the page (5, 15, 50, 100), normal a little number of lines (the pagesize). But supose the number of records is 5000. And when pagechange event ocorreded the develop call a repository again to get a new page of data. Will be people that will use a list like today and want that it is pagging and will the case that will page from the server.
@stsrki Like DataTable. it have two behavior. One that take the full data and page it and another that take data from the server.

Ricardo
@ricardoromaobr
Hi, I comment with some develop on visual studio for mac, about to create a template project with blazorise. They say that it looks pretty cool. I'm waitting for it news releases

Maybe it would be made :)

Mladen Macanović
@stsrki
@ricardoromaobr I agree, that would be really great and not that hard to do, I guess
Wanna contribute :smile: ?

Ricardo
@ricardoromaobr
No, I thimk that not. I will be looking to it.
https://www.monodevelop.com/developers/articles/creating-a-simple-project-template/
It ist for Visual Studio For Mac, But I sugest for Visual Studio team on Microsoft to do it.
I will ask again to know if they will do it
Ooops ! What I ask to he is that the microsoft team do that for us. :)

Mladen Macanović
@stsrki
In that case we'll just have to wait and see :)
Maybe I can look it up after I finish current Blazorise version

anknits
@anknits
Hello, Sorry if this is not the right place for feature discussion, but I couldn't find any. There's this plugin for chartjs that let's you zoom https://github.com/chartjs/chartjs-plugin-zoom
I was wondering if this is in the list of planned features and / or what I would need to do in order to use it. Should I fork the repo, install the plugin and write a wrapper? What would be the best way to go about it?

Mladen Macanović
@stsrki
Hi @anknits
I have a plan to implement chartjs plugins sometimes in the future. But with all other things planned I don't know how long it will be. I guess sometime after the v0.9.x. Now I don't much about the zoom plugin but it seems all you need to do is to add it to the chart config. I think you can do it by playing with javascript.

anknits
@anknits
Thanks for your comments @stsrki . I understand it can be a lot of work especially when there are few contributors.
I have decided to use JS all the way. I hope I can get that working.

Mladen Macanović
@stsrki
Hey guys. Just a quick note. The new version of Blazorise is upgraded to the latest .NET Core 3.1 preview2 and is ready for download.
release notes: https://blazorise.com/docs/release-notes/release0863/

_
Djinnet
@djinnet
Hello. Ehm... I am not sure if I can ask questions about blazorise charts here, since it's an extension, but please tell me if it's the wrong gitter to ask. My question is: My blazor app is server side blazor and I have tried to set up charts quite similar to the docs. The only different is the data and I am using piechart instead of linechart. I keeps getting "Object reference not set to an instance of an object" in OnAfterRenderAsync function and I can see the chart are null in breakpoint, but it's chart class object are referenced in the component, so technically it shouldn't be null. What do I need to do to solve this issue?

Mladen Macanović
@stsrki
@djinnet can you show me a sample code so I can have a look?

Ricardo
@ricardoromaobr
@djinnet The others components is working?Make a test. If the Startup class is not correct configured nothing will work.

Vitaliy Zayarniy
@UltWolf
Hi, all, sorry, but how i can customize blazorise charts and make my line chart without rectangle in the top of graph
?

Djinnet
@djinnet
@stsrki Sure, I'll try to make one. And @ricardoromaobr I haven't check if others components are working, but the startup class have the basic blazorise services and app code like in the start docs. However I couldn't find any docs on register charts in startup, but the charts docs said I only need the import.razor and the host.cshtml (since it's server side), which I have put these tags in place.

Djinnet
@djinnet
Interesting enough, when I was building the sample code, it works fine if I don't use AuthorizeView. Is it possible that could be the issue? Btw Sample code: https://github.com/djinnet/SampleBlazorise

Djinnet
@djinnet
But it still throws me errors whenever I am using AuthorizeView together with chart.

Djinnet
@djinnet
Okay. I forgot to add the AuthorizeRouteView stuff in the app.razor and the sample now works with authorizeView, but it still throws errors in my real code. I am really confusing of why this happens. That is really interesting when almost both of them are the same, but only the method to get the data are different.

Djinnet
@djinnet
Oh, my real code works fine now. I don't know what is the cause, but somehow copy and paste code from the sample demo to my real code solved the issue. I'll look into why it caused that strange issue when I got time, but for now I am glad it's working now. Thank you for your help. :)

After a long time the new version of Blazorise is finished and ready for download. Please look at the release notes for a full list of changes. 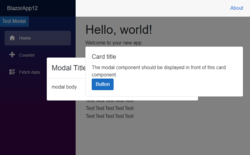 My Modal component is displayed behind some other blazorize components. (see example pic) would it help if I posted the project code?

Plankton555
@Plankton555
Hi! I am using Blazorise's DataGrid to display and manage some data and I am having trouble getting the Delete button/command to work.

My DataGrid is defined with Data="@activeSessions" and after pressing the Delete button I can confirm that the correct row is removed from the activeSessions variable, but that change is not reflected in the DataGrid view. I have tried both with and without calling StateHasChanged() but I see no difference.

Does anyone have any input that can point me in the right direction?

Mladen Macanović
@stsrki
@Plankton555 it should work automatically. Can you post a sample code so I can test it later when I get t?

Plankton555
@Plankton555
I see. Well, I'll put together a minimum sample and see if I get the same problem there.

I did not get the same problem there. Instead, turns out I didn't fully understand how the updating of the page worked.

Basically, the problem was that I fetched the data from a database and stored it in a variable myData. But I wanted to do some filtering on that before displaying it, so I transformed the data and stored it another variable activeSessions which was used in the DataGrid. However I didn't do the filtering/transformation in OnInitializedAsync when I fetched the data, but in the razor code just before I declared the DataGrid. So even though the removed row was deleted from activeSessions, it was immediately replaced with the original data in myData... Stupid me... :P

Anyway, thanks for the (rubberducking) help!