Tom Hulton-Harrop
@pr0g
Hello there! Very recently discovered glium after getting interested in Rust and it's absolutely fantastic! Huge props! Just got indexed drawing to work and am on a journey of discovery. Really impressive stuff! Excited to learn more! Thanks!

tyoc213 (David L)
@tyoc213
Hi there, Im trying to follow open.gl and I have this code https://gist.github.com/tyoc213/997b85418c54333ecb4f which has the same order of: vertex and colors and also the index buffer is the same as https://open.gl/drawing#Elementbuffers 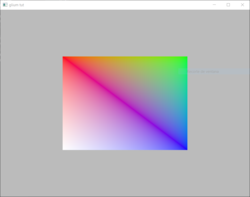 But that will be my output which is a little different, is there something I'm doing wrong or I should not expect the exact same result as the screenshoot in the tut?

Jeroen Bollen
@Binero
Hello!
How would I go about constructing a Cubemap texture? There doesn't seem to be a constructor?

Peter Bay Bastian
@pbbastian
How would I go about using glium with nalgebra? I tried enabling the nalgebra feature, but I'm told by cargo that glium doesn't have that feature
(as per this line https://github.com/tomaka/glium/blob/master/src/vertex/format.rs#L11 )
oh, seems nalgebra and cgmath support was removed as per this commit tomaka/glium@d08048f

Peter Bay Bastian
@pbbastian
what do i do then?

Jonathon Walsh
@Slogo
I'm having an odd problem using glium that I'm curious if anyone else has seen. My program runs fine on Windows, and the example programs run fine on my mac, but when I run my program on the mac there's no window that appears and I can't get glium to give me any sort of useful debug info.

hey guys! just asked on irc, but maybe someone here knows too :)

Hossein
@Hossein-Noroozpour
I have question, is Vulakano application capable of porting to Android? Has anybody ever experience of game or engine developement with it?

Hossein
@Hossein-Noroozpour
I know it has a winit part but, I have some problem to build the traingle example for Android, and I have really like to know is this gonna be a promising library for android developemt?

酿泉
@tioover
Hello, my English is very poor, so I use Google Translate.
I have a problem has always wanted to not understand, although the problem can be bypassed.
why textures implement AsUniformValue is impl AsUniformValue for &'a TextureType
not for TextureType? in the as_uniform_value(), code is UniformValue(*self, None), self: &'a Texture...

_
酿泉
@tioover
this can success compile, for what reason choose impl UniformValue for &'a TextureX? Is to avoid memory safety issues in this code?
I want to do this, but I'm afraid of causing problems, so come ask if this will cause any problems.
thanks very much!

Fedor Logachev
@not-fl3
@tomaka Hello! I made quick port of glium_text to rusttype https://github.com/not-fl3/glium_text - it works well for quick protyping and dont requires additional binary dependencies. Code is not clean, and I didnt found a way to get all characters from rusttype like you did with truetype, so I dont think that you need it in main repo.
But it works well for me, and I am thinking about publish it on crates.io with different name, like glium_text_rusttype, do you have any thoughts about it?

Hey guys! Quick question. In OpenGL, when you have something like:

A will now become:

?
(In GLSL to be more precise. This is possible due to "swizzling". But in this particular case - I am in a bit of a doubt.)

mhsjlw
@mhsjlw
What is the equivalent of glfwGetTime
I'm trying to perform a rotation, should I have my own timer, or does glutin/glium have a similar function
Thanks in advance! :D

mhsjlw
@mhsjlw
I've got another question:
What is the glium parameter equivalent of:
I've tried using all the blend functions with OneMinusSourceAlpha and it doesn't work
There is white stuff on the edge of the image as well as having a black background
If I run this in OpenGL it will make things transparent and it will remove that white stuff around the edge of the png

mhsjlw
@mhsjlw
To my first question:
And to my second:

Blightbuster
@Blightbuster
(this may be a stupid question) Which version of opengl is used by glium?

Blightbuster
@Blightbuster
so i could use opengl 4.5 features but had to test for required hardware first right?
first time with opengl :D

Corentin Brunel
@Luxed
Hey everyone, I'm trying to learn about OpenGL by following the learnopengl, but right I'm lost.
I am trying to send a struct in a uniform, I tried everything that I could and nothing worked.
I tried the UniformBuffer to see if it would work, but even by itself with a simple f32 value, it doesn't work:
I can force the value to 1.0, use a simpler uniform and it will work
but this absolutely doesn't want to work

I also tried renaming everything to make the block work, it just won't do anything.

Following this: LearnOpenGL - Lighting - Materials
What would I want to do to get the data I need across ? should I use regular uniforms and not worry about structs ? Even though it won't be as organized ?