PsyfireX
@PsyfireX
There are workarounds, but I'm trying to consider all options which is why I'm also looking at wartremover

Bijan Chokoufe Nejad
@bijancn
yeah I had some success with https://github.com/ghik/silencer for the cases that don't allow any other work arounds

PsyfireX
@PsyfireX
That does seem to be the quickest solution.

Rob Cornell
@rcornell
Hey all, with Maven, is there a way to pass the equivalent of this argument: wartremoverErrors ++= Warts.allBut(Wart.NonUnitStatements)

Rob Cornell
@rcornell
@PsyfireX Any idea about the maven implementation above?

John-Michael Reed
@JohnReedLOL
I am working on a horrible codebase and if I run WartRemover on it, the thing will blow up with thousands of warnings and errors. Is there a way for me to run WartRemover just on a single file in the codebase so that I can ignore all the issues from all the other files? The file consists of a single Scala object or class.

Rob Cornell
@rcornell
You could potentially set it to warnings only: "-P:wartremover:only-warn-traverser:org.wartremover.warts.Unsafe"
Could also build up exclusions to packages other thanthe one you're focused on:

To exclude a file or directory from all checks, use wartremoverExcluded in your build.sbt file:

Philipp Martini
@maphi
Hey, it looks like wartremover and better-monadic-for get in their way:
this reports error: [wartremover:NonUnitStatements] Statements must return Unit
any suggestions? is there an order to specify for sbt scalac plugins?

John-Michael Reed
@JohnReedLOL
@nDanshin - just copy-pasting whatever it says on the website/docs. If you don't know how to use sbt, read the sbt docs first.
Hey, I want to add WartRemover to an old multi-project Build.scala file. I am talking sbt version 13.5 old. How do I do that?

Victor Viale
@Koroeskohr
hi there ! I tried fiddling with the project today, and realised that the Var wart wasn't caught when a var is defined inside a trait, is there a reason why ? :) 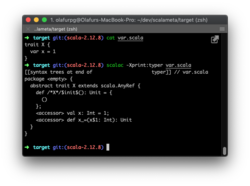 Nicolas Rinaudo
@nrinaudo
I'm hitting something that feels like a bug: with Scala 2.13, the StringPlusAny wart will trigger on string interpolation
is that working as intended?

_
Greg Pfeil
@sellout
@nrinaudo I feel like that is the correct behavior (unless you’re interpolating a String).

Nicolas Rinaudo
@nrinaudo
oh, it's been pointed out that there's actually a bug open for that: wartremover/wartremover#447
@sellout I think it's debatable. You might want to disallow string interpolation with non string members, but:
I think I understand the purpose of StringPlusAny, and that's not it
(but I might be wrong in that)

Greg Pfeil
@sellout
What is the purpose if not to avoid automatic conversion to String? Like, how is "some ${foo} string" different from "some " + foo + " string"?

Nicolas Rinaudo
@nrinaudo
well, because I'd assume it to be equivalent to "some " + foo.toString + " string", which I would have thought triggered ToString

Greg Pfeil
@sellout
In my own code bases, anything that resulted in a call to toString would be a bug, but I know that my use case is not everyone’s.

Nicolas Rinaudo
@nrinaudo
maybe I'm just not thinking about this right
oh, sure, that's not what I'm arguing. I'm saying that it feels like the wrong wart is triggered

Greg Pfeil
@sellout
Ah, I see.
So, there’s another wart to catch use of toString.

Nicolas Rinaudo
@nrinaudo
yeah. ToString
If that were triggered by string interpolation, I'd get it. But StringPlusAny feels confusing for newcomers - it's another of these failures where the root cause is hidden
and... does it mean that you basically do not use string interpolation, by the way?

Greg Pfeil
@sellout
Yeah, I don’t. Not for any good reason. But I wonder if there was a change in Scala 2.13 to have interpolation expand to + foo + instead of + foo.toString +? It seems like that would be a simplification that could prevent diverging semantics – i.e., it means that interpolation and concatenation both have the same conversion semantics, rather that having interpolation do its own string conversion, which could get out of sync with that for concatenation. Since both are currently defined to use .toString, it wouldn’t change behavior, but could change how it’s seen by WartRemover.

Greg Pfeil
@sellout
I think this is a case where those two warts should be a single thing like ImplicitStringConversion. Having each wart catch one low-level pattern makes these things a bit more fragile, where an “invisible” change becomes exposed.
I use Warts.AllBut(Any, Nothing) – but I guess most people probably want something more fine-grained than that 😆

Ghost
@ghost~54f4b69115522ed4b3dcb16d
In the spirit of TMI, they wanted to make s-interpolator more efficient, so instead of a loop calling stringbuilder.append, you get a "" + arg expression that the platform can optimize. Maybe StringBuilder.append(Object) is the missing wart.
Warts.andAll.
If you use Warts.andAll, your code still passes the build even if it's really ugly.

Ghost
@ghost~54f4b69115522ed4b3dcb16d
Is it worth adding that you can have a show interpolation that takes implicits? You can call it s"" for show.