Mihail Diordiev
@zalmoxisus
@cesardeazevedo it's a real JSON as { "payload" : "list of dispatched actions", "preloadedState": "initial or commited state" }
List of distatched ations and commited state is stringified though, for performance reason and to be able to support types which are not supported by JSON.stringify(like date, regex, undefined, nan, infinity, error, symbol, map, set and function)

Tushar Mathur
@tusharmath
Is there a way I can use the chrome extension with my own custom state manager?
Which is not based on redux

Ryan Ragle
@clarity-zz
Hey, I'm not sure how the Persist works?
I press the button, and it doesn't do anything?

Aaron Beall
@aaronbeall
What is the difference between __REDUX_DEVTOOLS_EXTENSION_COMPOSE__ and compose?

Andy Jansson
@andyjansson
Hi. How does the devtools timestamp the actions, and are there any way of manipulating these?

Matthew Bonig
@mbonig
Is this being actively monitored? seems like it's been a little dead in here for a while...

Andrew Ritchie
@poorlilritchie_twitter
Is there a simple way to load redux dev tools by default in selenium?

Hello there, I'm facing a problems using Redux DevTools from the simpole way:

The error is:
"The initialState argument passed to createStore has unexpected type of "Function"

Can someone help me?

Michał Domarus
@mdomarus
Hi! Do you know why the latest version is not deployed to npm?

Nick Bailey
@nickmbailey
are there any known issues with especially large actions breaking redux dev tools? i'm seeing an issue where redux dev tools simply stops seeing actions even though the app keeps working
the only thing i can think of is the size of the action (its the results of an api call that has a very large response)
i guess the other possibility would be for some reason the content in the action is breaking things
i'm experimenting with some middleware to convert the json from the api call into a more useful schema (converting timestamps to moment.js objects for example)

Nick Bailey
@nickmbailey
actually if i don't convert timestamps to moment.js objects its fine
so i guess that's what's breaking it

Hello everyone, I have been using REDUX-DEV-TOOLS and it is super awesome, but I miss a feature in the UI, or I may not know hot to do it.

I belive it wold be super awesome if this filter field in the UI allow regex filter the actions.
In my case, I work with redux forms that is fantastic and... by it self dispatches SEVERAL actions that I trust and dont care about.

The filter field in the redux dev tool UI allows me to filter a specific action... but I really want is to "hide" all the redux form actions (because I trust and dont care about) So... I belive it wold be super useful this field allow me to filter with a regex like /^[^@@REDUX-FORM].*/ 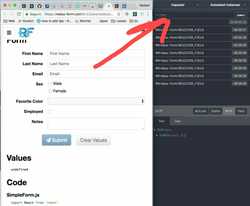 StoriesByKev
@StoriesByKev_twitter
hey everyone, I'm a little confused on how to enable stackTrace within redux dev tools
how do i turn this option on from within chrome?

hi! I have a quick question if anyone is able to help. I have built some React components as a library, I am building with Rollup as many blog articles suggest and creating dist for npmjs in CommonJS version and ES6.
Unfortunately, when transforming the CommonJS to ES6, there is a wrong import:
import redux, { combineReducers, createStore, applyMiddleware } from 'redux';

When using my components lib in a React app, it fails:
Attempted import error: 'redux' does not contain a default export (imported as 'redux').

If I remove import { composeWithDevTools } from 'redux-devtools-extension'; from my lib, everything works.
Any idea why it is built with that import?

Jean-Paul van Houten
@jeanpoelie
Hello, when will you be making an extension for the new Microsoft Edge based on Chromium?

I'm trying to support redux devtools in my library, and I can't get time travel to work. I've read a few articles but the methods shown don't appear to work. My code essentially works like this:

devtoolStore.getState() always returns the latest state, not the state from the point in time that I am moving to. Is my library supposed to record history itself? If so, I expect to receive an index to tell me what point in the past I need to go to. But I can't see any way to receive this index.

Rob
@rm-rf-etc
Never mind. I followed the (broken) link to the repo, and found the current API. This approached worked for me.
https://github.com/zalmoxisus/redux-devtools-extension/blob/master/examples/react-counter-messaging/components/Counter.js

Rob
@rm-rf-etc
In that example, there's no payload shown for the action, it only shows type.
How do I get payload to also appear?

Rob
@rm-rf-etc
I'm trying to understand how it works in redux, but there's more than one thing going on here.
https://github.com/reduxjs/redux-devtools/blob/2a3f358002409181ae79e54c8f16a4e4ff1e8bfb/packages/redux-devtools-inspector/demo/src/js/index.js#L40-L79

Rob
@rm-rf-etc
Okay, so it looks like a "store enhancer" is just another store which has a matching interface for dispatch, and that anything dispatched to the devtool store, will also get dispatched to the enhancer store. Am I right? I can't completely tell yet. Conclusions drawn based on:
https://github.com/reduxjs/redux/blob/8015a5875019c83a5bae67e51ac8c343da89e15a/test/createStore.spec.ts#L539-L562

Chris Barnes
@chrisbarnes
anyone else having issues lately with Firefox developer edition?
Things seem to work fine with the Chrome devtools...

Dawid Janiga
@dawidjaniga
Hi guys :wave: How is it possible that in GitHub the latest version of redux-devtools-extension is 2.17.1 but in npm 2.13.8?